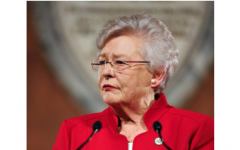 State Rep. Scott Stadthagen (R-Hartselle), who introduced the bill, said in February, “Basically, this bill — whatever your birth certificate says, if it says you are male or you are female, that is the sport you will play in K-12 athletics."

“I think this is more of a women’s rights [issue]," he added. "You know, this is something we definitely have to stay on top of. We have roughly about 16 other states that have filed legislation that is similar to this one. And I’m excited about it.”

Under the new law, at public K-12 schools, athletic events "allowing competition by one biological gender against another [are] prohibited unless the event specifically includes both genders."

The law also declares the following, "Physical differences between biological males and biological females have long made separate and sex-specific sports teams important so that female athletes can have equal opportunities to compete in sports.

"Physical advantages for biological males relevant to sports include, on average, a larger body size with more skeletal muscle mass, a lower percentage of body fat, and greater maximal delivery of anaerobic and aerobic energy than biological females.

"... On average, biological male athletes are bigger, faster, stronger, and more physically powerful than their biological female counterparts. This results in a significant sports performance gap between the sexes.

The states of Idaho, Mississippi, and Arkansas have laws on the books similar to the one in Alabama.

"This bill is a shameful bill that is built on a web of lies and misinformation," said Carmarion D. Harvey-Anderson, the Alabama State Director of the pro-LGBTQ lobby group Human Rights Campaign. "Ultimately, HB 391 will not just hurt transgender kids. It will hurt all Alabamans because the consequences of this law — economic harm, expensive taxpayer-funded legal battles, and a tarnished reputation — will ripple across the state."