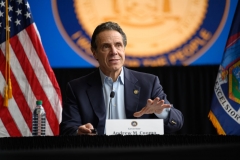 (CNSNews.com) - New York Gov. Andrew Cuomo argued Wednesday that contrary to the argument of those looking to reopen the economy sooner rather than later, the failure of the economy does not equal death - “the illness is death.”

During his press conference, Cuomo was asked about protesters who were outside demanding that the state reopen businesses so that they could earn a paycheck again.

“I don’t know if you can hear, but there are protesters outside,” a reporter said. “These are regular people who are not getting a paycheck. Some of them are not getting an unemployment check.”

The point the protesters are making is “the cure can’t be worse than the illness itself,” she said.

As far as those who have yet to file unemployment claims because the website collapsed under the surge in demand, the governor assured them that they will receive payments that are retroactive to the date of unemployment.

And those who are not willing to wait until the unemployment system is straightened and would rather get a paycheck, they can get a job as an essential worker, Cuomo said.

REPORTER: What if someone commits suicide because they can’t pay their bills?

REPORTER: What if the economy failing equals death because of mental illness, the people stuck at home.

CUOMO: No it doesn’t. It doesn’t equal death. Economic hardship, yes, very bad. Not death. Emotional stress from being locked in a house, very bad, not death. Domestic violence is on the increase. Very bad, not death, and not death of someone else. See that’s what we have to factor into this equation. Yeah, it’s your life. Do whatever you want, but you’re not responsible for my life. You have a responsibility to me. It’s not just about you. You have a responsibility to me, right? We started here saying it’s not about me, it’s about we. Get your head around the ‘we’ concept. So it’s not all about you, it’s about me too. It’s about we.

Also, I get the economic hardship. Everybody gets it. Everybody feels it. The federal government is sending out a check for individuals - $600, an additional $1200. We are moving heaven and earth to get the unemployment payments going, so we get the economic anxiety. The question is how do you respond to it, and do you respond to it in a way that jeopardizes public health and possibly causes more people to die?

Think about it as if it’s your family that might get infected, right? That’s what we’re talking about. When you think about it as your family, you have a different perspective. I’ll tell you the truth. It’s not an abstract argument where they say he says she says, he says, she says. I know that’s how it works. Protesters say this. Governor says this.

When I see 484 New Yorkers dying, I feel like it’s people in my family, and nothing comes before the public health risk of someone else’s life, and that’s where we are.

REPORTER:: They’re also saying, if you can’t afford to pay me unemployment or your system is not set up ---

CUOMO: You will be paid unemployment

REPORTER: But they can’t wait for the money. They’re out of money.

REPORTER: They’re saying is there a fundamental right to work if the government can’t get me the money when I need it?

REPORTER: But people aren’t hiring because of....