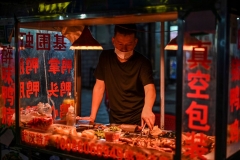 A man wearing a facemask sells food at his stall on a street in Wuhan, Chinas central Hubei province on May 20, 2020. - China has largely brought the coronavirus under control within its borders since the outbreak first emerged in the city of Wuhan late last year. (Photo by HECTOR RETAMAL/AFP via Getty Images)

(CNSNews.com) - Sens. Kamala Harris (D-Calif.), Tammy Duckworth (D-Ill.), and Mazie Hirono (D-Hawaii) introduced a resolution last week condemning anti-Asian racism and the use of the terms “Wuhan virus”, “Chinese virus,” or “Kung flu” in referring to the coronavirus or COVID-19.

“Whereas the use of anti-Asian terminology and rhetoric related to COVID–19, such as the ‘’Chinese Virus’’, ‘‘Wuhan Virus’’, and ‘Kung-flu’, have perpetuated anti-Asian stigma,” the resolution stated.

“After Donald Trump repeatedly used his platform to try to racialize this disease, we continue to see a spike in rhetoric and actions against the Asian American community because of misguided fears surrounding the COVID-19 outbreak,” Duckworth said in a statement.

“We must continue to speak out against these racist acts and those who are stoking these fears about a virus that we know strikes without regard to the color of a person’s skin or the language they speak,” she added.

“Inflammatory and racist rhetoric from officials at the highest level of our government has contributed to a disturbing rise in hate-crimes targeting Asian Americans during the coronavirus pandemic,” Hirono said. “This resolution sends a clear message of solidarity that stoking racial divisions will only impede our efforts to overcome the immense challenges that this virus poses to our country.”

“The ongoing verbal and physical attacks against Asians, Asian-Americans, and the broader AAPI community prompted by the coronavirus outbreak are sickening,” Harris said in a statement. “COVID-19 does not care about your age, your gender, or your race. We must all stand together to condemn these racist attacks– there is no place for hate and discrimination in this country.”

The resolution said there has been a dramatic rise in reported hate crimes and incidents against people of Asian descent since January 2020.

“Whereas, according to a recent study, there were over 400 cases of anti-Asian discrimination related to COVID–19 between February 9, 2020, and March 7, 2020,” the resolution stated.

The resolution also pointed to specific incidents of “anti-Asian violence” in March:

“A woman wearing a mask was kicked and punched at a New York City subway station, 2 children and 2 adults were stabbed at a wholesale grocery in Midland, Texas, a couple was assaulted and robbed by a group of attackers in Philadelphia, and a 16-year-old boy was sent to the hospital after being attacked by bullies in Los Angeles, California,” the resolution stated.