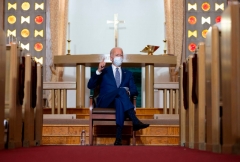 Democratic presidential candidate and former US Vice President Joe Biden speaks at Grace Lutheran Church in Kenosha, Wisconsin, on September 3, 2020, in the aftermath of the police shooting of Jacob Blake. (Photo by JIM WATSON/AFP via Getty Images)

“My view is we should turn prison reform - and I’ve been preaching this the last five years - from prison punishment to reform. So for example, anybody serves their time in prison when they get out, they should be entitled to every single program that exists under the federal government,” he said Thursday speaking  at a church in Kenosha, Wis.

“But right now, I wrote years ago with a guy named Specter, a senator from Pennsylvania, the Second Chance Act, because right now we’re in a situation where when you get out of prison, and I think you all know this, you get a bus ticket and $25. By the way, 93% of everybody -- 93 out of every 100 of prisoners in prison are behind a city jail, a county jail, a state jail, not a federal prison. Barack and I were able to reduce the prison population by 38,000 folks,” he said.

Biden said that people with drug addictions who are  convicted of drug-related crimes should go to rehab instead of jail so they don’t have a criminal record.

He also called for building more rehab centers instead of more prisons.

“Anybody that gets convicted of a drug crime, not one that is in terms of massive selling, but consumption. They shouldn't go to prison. They should go to mandatory rehabilitation. Instead of building more prisons I've been proposing for some time, we build rehabilitation centers - mandatory,” the former vice president said.

“They have to go to mandatory rehab, but it's not part of the record when they get out if they finish it. Because the point you made, you get a record and it stays with you. Sorry. You can't get the job, because you did the following, even if it's a misdemeanor. We shouldn't be putting anybody in jail for that,” Biden said.