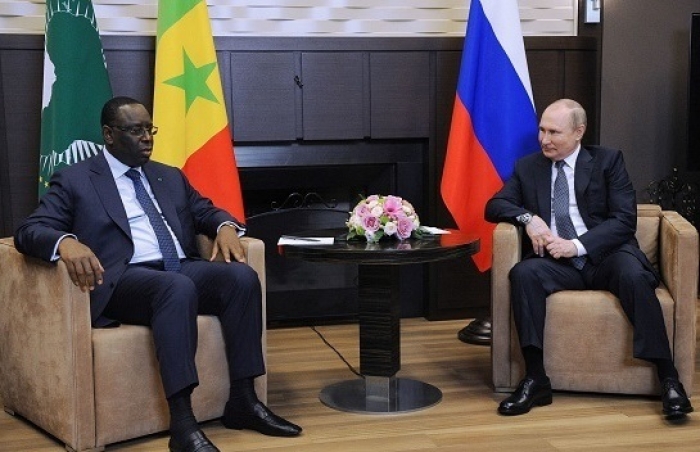 Russian President Vladimir Putin meets with Macky Sall, president of Senegal and chairman of the African Union, in Sochi this month. (Photo by Mikhail Klimentyev/ Sputnik /AFP via Getty Images)

(CNSNews.com) – The White House pushed back Tuesday on accusations that the U.S. is seeking to punish African countries for not siding with the West over Russia, saying nations have the right to make sovereign decisions – but also underlining the need for the invasion of Ukraine to carry costs for Moscow.

At the same time, Biden has been clear that Russian President Vladimir Putin “needs to be held accountable for this unprovoked war of aggression,” he said.

“And so, it’s difficult for him to look at countries around the world who might be willing not to impose those consequences, who might be looking for ways to reward Mr. Putin for what he is doing in Ukraine.”

While he could not speak to what Congress may be doing, Kirby said with reference to the president, “this isn’t about forcing anybody.”

He said Biden “understands the sovereign decisions that nations in Africa have to make.”

“But he also believes and stands strongly on the principle that Mr. Putin needs to suffer consequences for this war of aggression – consequences around the world as well.”

The questioner was evidently alluding to the bipartisan Countering Malign Russian Activities in Africa Act, which the House passed in an overwhelming 415-9 vote in April and now faces Senate consideration.

Introduced by House Foreign Affairs Committee chairman Gregory Meeks (D-N.Y.), the legislation requires the secretary of state “to develop and submit to Congress a strategy and implementation plan outlining United States efforts to counter the malign influence and activities of the Russian Federation and its proxies in Africa.”

Russian “malign influence and activities” are described as those “that undermine United States objectives and interests.”

While Meeks and other sponsors portrayed it as a pro-Africa bill – it aims include bolstering democratic institutions, advancing good governance, and protecting Africans from Kremlin-linked mercenaries – it attracted accusations of “neo colonialism” from some critics in Africa.

Introduced in late March, the bill was one of a number drafted in response to the invasion of Ukraine that began weeks earlier.

On the day the House Foreign Affairs Committee marked it up, ranking member Rep. Michael McCaul (R-Texas), an original co-sponsor, called for the need to increase sanctions on Putin, and to “make every state choose between doing business with the free world or with a war criminal.”

Divisions within Africa over how to respond to the invasion were seen when the U.N. General Assembly in early March passed a resolution condemning Russia’s actions in a 141-5 vote.

Another 27 African countries supported the resolution. Eight did not vote.

Asked later about the high abstention rate from Africa, U.S. Ambassador to the U.N. Linda Thomas-Greenfield told an interviewer that African nations may have seen abstaining as taking a neutral stance – but contended that “there is no neutral ground here.”

“[African nations are] feeling the impact of this war of aggression, and until their voices are heard, until the Russians hear from them that they are not supporting this effort, the Russians will see them as supporting them,” she said.

“You cannot stand on the sidelines and watch the aggression that we see taking place in Ukraine and say you’re going to be neutral about it.”

Thomas-Greenfield countered suggestions that African nations’ stance was a result of their heavy dependence on Russian imports, noting that sub-Saharan Africa’s bilateral trade with the U.S. and Europe was worth $44 billion in 2021 compared to $7 billion with Russia.

The Countering Malign Russian Activities in Africa Act requires the secretary of state’s reporting to include identification of African governments and officials “that have facilitated payments and other prohibited activities” benefiting sanctioned Russian individuals and entities, as well as U.S. efforts to hold them accountable for doing so.

The secretary is also mandated to assess Russia’s strategic objectives and security priorities in Africa, including attempts to “manipulate” African governments, policies, and voter preferences; and to invest or engage in strategic sectors such as mining and military basing.