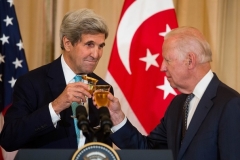 (CNSNews.com) – Fifty-three years before the U.S.-brokered decision by Sudan to normalize ties with Israel, its capital was the setting for a landmark Arab summit that laid the foundation for Arab rejection of the Jewish state for the next half century.

Khartoum was host to that summit in the summer of 1967, adding to the symbolic importance of the decision by its interim government to become the fifth Arab League member to agree to normalize ties with Israel – and the third in the space of just two months of Trump administration diplomacy.

The gathering in Khartoum, held two months after Israel defeated three Arab armies in the Six Day War, produced the infamous “three no’s,” as the Arab states declared that there would be no peace with Israel, no recognition of Israel, and no negotiations with Israel.

The so-called “Khartoum platform” was contained in a resolution stating that the Arab states “agreed to unified efforts at international and diplomatic levels to eliminate the consequences of aggression and to assure the withdrawal of the aggressor forces of Israel from Arab lands, but within the limits to which Arab states are committed: No peace with Israel, no negotiation with Israel, no recognition of Israel, and maintenance of the rights of Palestinian people in their nation.”

The Trump administration now appears to be doing something that former Secretary of State John Kerry said could never be done.

In late 2016, Kerry told a think tank audience, “There will be no separate peace between Israel and the Arab world.”

“I’ve heard several prominent politicians in Israel sometimes saying, ‘Well, the Arab world is in a different place now, we just have to reach out to them and we can work some things with the Arab world and [then] we’ll deal with the Palestinians.’ No.”

While intentionally or otherwise alluding to the Khartoum declaration, Kerry then added, “No, no, and no.”

“There will be no advance and separate peace with the Arab world without the Palestinian process and Palestinian peace,” he stressed. “Everybody needs to understand that. That is a hard reality.”

Saying no to the 'three no's'

The Arab League in 1967 had 13 members. (It has 22 today.) Three of those 13 – Egypt, Jordan, and now Sudan – have abandoned the “three no’s.” The United Arab Emirates and Bahrain did not exist as independent nations at the time and so were not members of the Arab League, but they later embraced the Arab boycott of Israel. Both have now agreed to full normalization of ties with Israel.

Of the three Israeli-Arab accords secured by the administration since August, the one with Sudan is arguably the most significant politically since Sudan – unlike the UAE and Bahrain – has been technically at war with Israel for decades. Sudanese troops fought alongside other Arabs against the Israelis in the 1948 war of independence and the Six Day War – and Sudan would have participated in the 1973 Yom Kippur War as well had its infantry brigade arrived in Egypt in time.

Khartoum was also where Palestine Liberation Organization terrorists seized and murdered U.S. Ambassador Cleo Noel and two other diplomats during a 1974 hostage-taking at the American Embassy.

Yasser Arafat was directly linked to the plot, according to subsequently released State Department records. The Sudanese government released two of the eight Palestinian terrorists, convicted the other six for murder, but within hours of the verdict allowed them to fly out of the country, and back to Arafat’s PLO.

Although the Egyptians and, later, the Jordanians went their own way, the Arab bloc has generally complied with the principle that a peaceful settlement between Israel and the Palestinians is a prerequisite to normalization of ties with the rest of the Arab world.

After years of following that conventional thinking and frustrated attempts by a series of U.S. administrations to secure an Israel-Palestinian accord, President Trump’s team took a different tack. It marginalized the Palestinian leadership – while undercutting its diplomatic initiatives at the U.N. – and focused on encouraging Arab states to make separate deals with Israel.