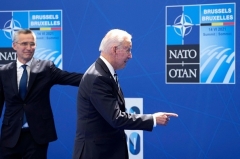 (CNSNews.com) – The State Department on Wednesday insisted that the U.S. closely coordinated its troop withdrawal from Afghanistan with its NATO allies, rejecting criticism from some British lawmakers who suggested otherwise.

“British lawmakers were unhappy with his timeline to begin with, and now they’re obviously very unhappy with the chaotic exit,” a reporter said during a briefing at the department.

She was referring to criticism aired by some British MPs during a debate on Afghanistan. The House of Commons was recalled from summer recess, for the first time in eight years, to debate the situation.

“They’ve been criticizing what they say is a policy failure that is not only an embarrassment for the United States, but it embarrasses and weakens the West as well as the U.S., and they can’t rely on the U.S. like they used to,” the reporter said.

The critics had also said the U.S. had basically “presented them with a fait accompli” regarding the decision and timetable to withdraw.

“Our coordination with the British government, with all of our NATO allies, has been consistent, it has been clear, and there has been a consensus on this,” he said.

In conjunction with the final drawdown of U.S. troops that began at the start of May, some 7,000 troops from NATO allies and partners were also withdrawn.

Price said the “mantra” of the alliance commitment in Afghanistan had always been “in together, adjust together, and out together.”

Secretary of State Antony Blinken consulted with NATO allies in Brussels in March and again in April, when he was joined by Defense Secretary Gen. Lloyd Austin.

It was during their April visit that President Biden back in Washington announced that all U.S. troops would be out before September 11, and effectively ditched the “conditions-based” principle that had long been upheld by NATO Secretary-General Jens Stoltenberg as governing all decisions on the deployment.

Price said the NATO alliance had spoken “with one voice on this.”

“I know in the game of politics, whether that’s here or in London, there are always going to be critics and naysayers,” he said.

“You have heard this president speak in clear and decisive terms about the commitment that the United States fulfilled to Afghanistan, about the mission that we went there to pursue, about the conditions that we inherited, and about his profound obligation to the safety and security of the American people,” Price said.

During the Commons debate Tom Tugendhat, a Conservative lawmaker who chairs the House of Commons foreign affairs committee – and an Afghanistan and Iraq War combat veteran – gave a searing statement.

“Like many veterans, this last week has seen me struggle through anger, grief and rage – through the feeling of abandonment of not just a country, but the sacrifice that my friends made,” he began.

Having attended funerals of fallen soldiers, he said, the Taliban’s takeover of Afghanistan had “torn open some of those wounds, has left them raw and left us all hurting.”

Tugendhat said it was “shameful” for Biden to “call into question the courage of men I fought with, to claim that they ran” – a reference to the president’s remarks this week about the Afghan forces.

“Those who have never fought for the colors they fly should be careful about criticizing those who have,” he said.

Tugendhat suggested that Britain may need to look to allies other than the United States.

“We can set out a vision, clearly articulated, for reinvigorating our European NATO partners, to make sure that we are not dependent on a single ally, on the decision of a single leader, but that we can work together – with Japan and Australia, with France and Germany, with partners large and small – and make sure that we hold the line together.”

“So let us stop talking about forever wars. Let us recognize that forever peace is bought, not cheaply, but hard, through determination and the will to endure,” Tugendhat said.

“The tragedy of Afghanistan is that we are swapping that patient achievement for a second fire and a second war.”