President Obama shares a toast during a luncheon for U.N. General Assembly delegates in New York in September 2014. (Photo by Timothy A. Clary/AFP via Getty Images)

(CNSNews.com) – Reacting to implied criticism from the diplomat nominated to be the next U.S. ambassador to the U.N., Secretary of State Mike Pompeo suggested on Tuesday that a Biden administration may embrace multilateralism for reasons of international acceptance rather than actually getting things done that are in the United States’ interests.

“I couldn’t tell exactly from her statement, but multilateralism for the sake of hanging out with your buddies at a cool cocktail party, that’s not in the best interest of the United States of America,” Pompeo told Fox News’ Bret Baier when asked about Linda Thomas-Greenfield’s comments. “We work with nations when we have common interests, and we develop coalitions that actually deliver real results and reflect the reality on the ground.”

Baier had played a clip in which Thomas-Greenfield, a veteran foreign service officer nominated by Joe Biden to serve as ambassador to the U.N., said in Wilmington, Dela. on Tuesday, “on this day I’m thinking about the American people, my fellow career diplomats and public servants around the world. I want to say to you: America is back, multilateralism is back, diplomacy is back.”

Pompeo, just back from a ten-day trip to seven countries in Europe and the Middle East, was invited to respond.

“Where to begin, Bret?” he began. “I remember what the previous administration did. They described leadership as ‘leading from behind.’ President Trump never did that. We built out real coalitions: The coalition that crushed the caliphate in Syria; the coalition that’s pushed back against the Chinese Communist Party; a coalition that refused to appease Iran. The list of work that we’ve done is great.”

(In an interview with the New Yorker in 2011, an anonymous advisor to President Obama memorably described his strategy in the Libya crisis as one of “leading from behind.”) 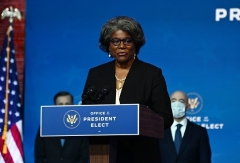 U.S. Ambassador to the U.N.-nominee Linda Thomas-Greenfield speaks in Wilmington, Delaware on Tuesday. (Photo by Chandan Khanna/AFP via Getty Images)

Critics view the Trump administration as insufficiently deferential to multilateral institutions, citing its criticism of and withdrawal from U.N. agencies, uncompromising support for Israel at the U.N., and censure of NATO allies falling short on military spending pledges.

Pompeo has pushed back over recent time, pointing to multilateral initiatives including the coalition to defeat ISIS, the International Religious Freedom or Belief Alliance, the 5G Clean Network, the informal partnership with Israel and Gulf Arab states focused on countering the Iranian regime’s provocative regional behavior (and the historic Israel normalization drive), the garnering of support of almost 60 governments recognizing Juan Guaido as the legitimate president of Venezuela, and the revival of the strategic Indo-Pacific grouping of democracies known as the “Quad” – Japan, India , Australia, and the United States.

(The Quad was formally launched during the Bush administration in 2007, and regarded by Beijing from the outset as an anti-China effort. It fizzled out after an Australian Labor government backed away, worried about strains with China. The Trump administration revived it in 2017.)

“I’m proud of the work the State Department has done,” Pompeo said. “We’re going to continue to do that. It’s our responsibility.”

‘The pivot to Asia was a joke’

Baier then quoted from a Foreign Affairs article in which former Defense Secretary Jim Mattis (and three co-authors) wrote, “In practice, ‘America first’ has meant ‘America alone.’ That has damaged the country’s ability to address problems before they reach U.S. territory and has thus compounded the danger emergent threats pose.”

“I have a lot of respect for Jim, but he’s just dead wrong on that,” Pompeo responded.

The “pivot” to Asia was born in an essay and speech in 2011 by Secretary of State Hillary Clinton, who spoke of the need to “pivot to new global realities” as wars in Iraq and Afghanistan wound down.

When he succeeded her Secretary of State John Kerry shunned a term which he said “implies that we’re turning away from somewhere else” – and favored “rebalance.”

Obama officials said the “rebalance” remained a priority through 2016, although in reality it was not viewed as such. Obama twice canceled scheduled visits to Asia at short notice, and the Middle East and, later, Ukraine appeared repeatedly to draw the administration’s attention away from the Asia-Pacific.

A State Department’s Office of Inspector-General (OIG) review in 2013 found that the administration had put neither the additional funding nor staffing necessary in place to carry out its “highly publicized pivot or rebalance toward Asia.”

While the administration had increased U.S. engagement with regional institutions, it said, the “rebalance toward Asia has not been matched by additional financial or human resources.”