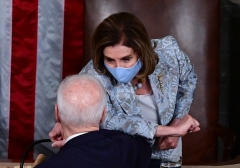 (CNSNews.com) – House Speaker Nancy Pelosi told a meeting of lawmakers in Europe that the Democratic-controlled House of Representatives has “launched the most ambitious climate plan in our history” and was now working on “something that President Biden calls Build Back Better.”

“Better,” she told the Inter-Parliamentary Union’s “pre-COP26 parliamentary meeting” in Rome at the weekend, “because it would be irresponsible, in our view, to build the same way we had built before.”

“It would be a dereliction of duty for us not to go into the future in a green way, and that responds to the urgency of the climate crisis,” Pelosi said. “It’s all about the children. It’s all about the future. The planet belongs to them, and they know it.”

The IPU meetings in the Italian capital brought together legislators affiliated with climate-related committees from around the world in preparation for the upcoming U.N. climate mega-conference in Glasgow, Scotland. COP26 is the 26th “conference of the parties” to the U.N. Framework Convention on Climate Change.

Pelosi expressed enthusiasm about the presence at the event of Giorgio Parisi, an Italian theoretical physicist who was named last week as a joint winner of the 2021 Nobel prize in physics for his work on “complex systems.”

Speaking before Pelosi, Parisi said governments’ response to climate change have been inadequate, and that “much more forceful action” was needed. He warned that floods, hurricanes, heatwaves and wildfires – phenomena blamed on a warming planet – were “just a small taste of what will happen on a much greater scale.”

‘What a thrill and what a surprise to be here with the Nobel laureate Giorgio Parisi,” Pelosi said. “Thank you so much for your words of wisdom – true words of wisdom from a scientist.”

“Sometimes in Congress, they say to us, ‘It’s either science or faith,’” she said. “No, that’s not a choice. Science is an answer to our prayers.”

Pelosi told her listeners President Biden was a leader in the climate field.

Pelosi then mentioned former vice president and senator Al Gore, remarking that “we have a little competition on who was the earliest on all of that, but President Biden feels great authority on this subject. And that is a – that’s a big change for us. Let’s put it that way.”

Then-Sen. Biden (D-Del.) in September 1986 introduced the Global Climate Protection Act, which called on the president to establish a global warming task force.

Late the previous year, Sen. Gore (D-Tenn.) introduced a concurrent resolution requesting the president to create an international research program on “the greenhouse effect of increased concentration of carbon dioxide and greenhouse gases in the Earth’s atmosphere.”

Former Sen. John Kerry (D-Mass.), currently serving as Biden’s climate envoy, dates his activism back to helping organize the inaugural Earth Day event in Massachusetts in 1970, well before he was elected to the Senate in 1984.