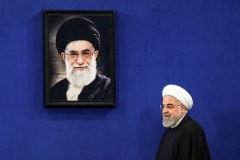 (CNSNews.com) – Days after Iran’s supreme leader likened Israel to the coronavirus and a “cancerous tumor,” President Hassan Rouhani on Tuesday issued an order on implementing a new “anti-Zionist” law, which among other things makes “any cooperation” with Israel a likely capital offense.

Rouhani’s communique stated that the interior, intelligence, defense, and foreign ministries, as well as Iran’s judiciary and the Supreme National Security Council, are required to implement the law, the Fars news agency reported.

Among the 16 provisions of the “Confronting the hostile acts of the Zionist regime against peace and security” law, according to Fars, any cooperation with Israel is defined as “enmity against Allah” (moharebeh ) and “spreading corruption on earth” (mofsed-e-filarz).

Under the regime’s Islamic Penal Code, the two offenses carry the death penalty in most cases.

As it has every year since the event was inaugurated by Ayatollah Ruhollah Khomeini in 1979, the regime marked the last Friday of Ramadan as Quds (Jerusalem) Day, although this year did not witness the customary anti-Israel and anti-U.S. mass rallies, due to coronavirus pandemic restrictions on gatherings.

Supreme leader Ayatollah Ali Khamenei marked the occasion with a lengthy televised speech, likening Israel a number of times to a cancer and even to the coronavirus.

“The Zionist regime is a deadly, cancerous growth and a detriment to this region,” he said. “It will undoubtedly be uprooted and destroyed.”

“Some people argue that the Zionist regime is a reality that the region must come to terms with. They forget that it is necessary to fight and destroy fatal and harmful realities,” he said.

“Today the coronavirus is a reality and yet all wise people agree that it is necessary to fight it. Undoubtedly, the long-lasting virus of Zionism will not last much longer, and it will be uprooted thanks to the determination, faith and pride of the youth.”

Khamenei characterized Iran as the vanguard in the fight for Palestine. While certain Arab states, “minions of the United States,” had faltered in the mission, “the dawn of the Islamic Revolution in Iran opened up a new chapter in the struggle for Palestine,” leading to the emergence of a “resistance front” across the region.

Iran has long been the leading sponsor of terrorist organizations committed to the destruction of the state of Israel, including Hezbollah, Hamas and the Palestinian Islamic Jihad. Together they have been responsible for armed attacks costing the lives of thousands of Israeli civilians and soldiers.

Khamenei in his speech was unusually frank about the regime’s support for the anti-Israel terrorists:

“One day we came to the conclusion that the Palestinian fighters had piety, pride and courage and their only problem was that they had no weapons in their hands,” he said. “With divine guidance and assistance, we planned and the result was that the balance of power was transformed in Palestine, and today Gaza can stand against the aggression of the Zionist enemy and defeat it.”

He called on “everyone” to support the “jihad.”

Israeli Prime Minister Binyamin Netanyahu’s response to Khamenei’s remarks was a blunt one: “Whoever threatens Israel with destruction puts himself in similar danger.”

Iranian lawmakers passed the anti-Zionist bill on May 12, and the Guardian Council subsequently reviewed and approved it.

Among other things, it forbids the use in Iran of Israeli technology products.

(News of that provision prompted Times of Israel editor David Horovitz to pen a column outlining what the Iranians would have to give up if it were to be actually enforced, including technology at the heart of personal computers, popular Internet search engines, smartphones, cloud storage, medical devices, and cyber defense systems.)

Other provisions of the new law include:

--A ban is to be enforced on any Israeli goods and on the participation of Israeli nationals and firms in events inside Iran.

--The foreign ministry is required to advocate for a U.N.-endorsed referendum on the political future of the area Iran calls Palestine (which includes all of present-day Israel).

--The foreign ministry must take steps to establish a “virtual embassy in Palestine.”