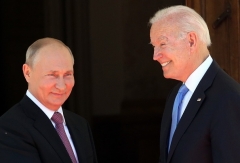 (CNSNews.com) – President Biden “has done more to improve Russia’s economic and strategic standing” in eight months than his predecessor ever did, former South Carolina governor and ambassador to the U.N. Nikki Haley said on Tuesday night.

“The media relentlessly and falsely called Donald Trump a Russian stooge,” Haley told an audience at the Ronald Reagan Presidential Library in California. “In eight months in office, Joe Biden has done more to improve Russia’s economic and strategic standing than Trump ever did. It’s disgraceful.”

Haley said Russian President Vladimir Putin was “thinking about how he can swallow more of Ukraine, and perhaps other neighbors – and he’s pocketing the president’s foolish concession on Nord Stream 2.”

She was referring to the Russia-Germany natural gas pipeline, which is preparing to go operational. Despite vocally opposing the project, the Biden administration angered congressional critics, first by choosing to waive sanctions against the key players, and then by striking an arrangement with German that effectively gave the green light for the project to go ahead.

In a sometimes searing speech, Haley painted Biden as a shaky leader whose foreign policies, especially the withdrawal from Afghanistan, had sent a message of weakness to America’s foes, from Russia to China and from Iran to the Taliban.

“The fall of Afghanistan has every one of them thinking America’s era has ended, and theirs has arrived,” she said. “The Taliban victory in Afghanistan is a total disgrace. It leaves America weaker in the world and less safe at home.”

“It’s the fall of Saigon and the Iran hostage crisis rolled into one,” Haley continued. “Our country hasn’t been this embarrassed in my lifetime. The American people have every right to be angry, because it didn’t have to be this way.”

On China, Haley said, “Beijing now sees the biggest opening it ever had. Taiwan is directly in its crosshairs.”

“But it’s not just Taiwan,” she said, suggesting that other allies and partners like Japan, South Korea, India and Australia were also left wondering if they could rely on U.S. support.

“We’re in a clash of civilizations, and the bad guys think the good guys lack the will to win,” she said. “That perception is very dangerous for America, and for the free world.”

Haley also criticized Biden for not calling out China by name during his inaugural address to the U.N. General Assembly last month.

Biden’s speech did include one reference to Xinjiang, the Chinese region where according to the Biden and Trump administrations genocide mass abuses against minority Muslims constitutes genocide.

“We all must call out and condemn the targeting and oppression of racial, ethnic, and religious minorities when it occurs in -- whether it occurs in Xinjiang or northern Ethiopia or anywhere in the world,” he said.

Haley drew applause when she touched on the issue of America’s view of itself.

“The barbarians of the world fear nothing more than a confident and strong United States with the courage of our convictions,” she said. “The most important mission of our time is to stop our national self-loathing and to regain our courage and renew our convictions.”

Haley was the fifth speaker in the Reagan Library’s “Time for Choosing” series, which it describes as “a new forum for leading voices in the conservative movement to address critical questions facing the future of the Republican Party.”