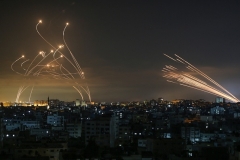 (CNSNews.com) – A group of progressive Democrats took to the House floor on Thursday evening to rip into Israel over its policies towards Palestinians and the current violent escalation, while others in the party focused on the impact Hamas rocket fire was having on Israeli and Palestinian civilians.

A “special orders” session after legislative business was concluded was arranged by Rep. Mark Pocan (D-Wisc.), co-chair of the Congressional Progressive Caucus, to give members of the “Squad” and others the opportunity to have their say on the crisis.

“More and more members of Congress are now wanting to address peace in this region in a more forthright way,” Pocan said. “I am pleased to be joined by a number of my colleagues tonight who have taken leadership positions in talking about peace in the Middle East for all people.”

First up was Rep. Rashida Tlaib (D-Mich.), who gave a sometimes emotional statement, taking the Biden administration to task for expressing support for an Israel under rocket fire, but in her view not sufficiently supportive of the Palestinians.

Tlaib, herself a Palestinian American, said there had been no recognition by the administration of issues relating to evictions of Palestinians from their homes or Israel police “harassment and terror” against “worshippers, kneeling down and praying and celebrating their holiest days in one of the holiest places.”

She was apparently referring to clashes on the Temple Mount early this week, when Palestinians threw rocks and projectiles – sometimes from within the al-Aqsa mosque itself – at security forces who used rubber bullets and stun grenades to disperse them. The pro-Palestinian narrative portrays the incidents as Israeli forces “attacking” or “storming” the third-holiest site in Islam.

Tlaib’s mention of evictions refers to a decades-old property dispute between Jews and Arabs in eastern Jerusalem now before the Israeli Supreme Court, where several Palestinian families are contesting a lower court’s eviction order. Amid the current tensions, the court postponed a hearing that had been due early this week.

Despite her claims that the administration has not “recognized” such matters, the State Department has spoken about the evictions issue and the tensions on the Temple Mount, calling in both cases for de-escalation and calm.

Tlaib in her statement did not use the words “rockets” or “missiles” or “Hamas,” although she did at one point say that “no child, Palestinian or Israeli, whoever they are, should ever have to worry that death will rain from the sky.”

In further criticism of some in her own party, Tlaib said the Democratic leadership opposes the Boycott Divestment, and Sanctions (BDS) movement, “despite the same tactics being critical to ending the South African apartheid mere decades ago.”

She also pointed to a recent letter signed by 330 members of Congress, around half of them Democrats, expressing support for continuing military aid to Israel, and stating that “[r]educing funding or adding conditions on security assistance would be detrimental to Israel’s ability to defend itself against all threats.”

Tlaib interpreted that as follows: “Three hundred and thirty of my own colleagues, Democrats and Republicans here, 75 percent of the body here signed a letter pledging that Israel shall never be made to comply with basic human rights laws that other countries that receive our military aid must observe.”

By contrast, earlier on Thursday, a number of Democrats spoke in support of Israel.

“Hamas has fired 1,600 rockets into Israel,” said Rep. Brad Sherman (D-Calif.). “Each rocket is a war crime, for each was fired solely for the purpose of killing as many civilians as possible.”

“We grieve every civilian death, Israeli and Palestinian,” he said. “Hamas has caused many Palestinian deaths since one-quarter of its rockets aimed at Israel actually explode in Gaza, and because Hamas locates its military operations in civilian neighborhoods, using human shields.”

Rep. Lois Frankel (D-Fla.) read out of the names of three of the Israeli victims of the indiscriminate rocket firing – 63-year-old grandmother Leah Yom Tov, killed when a rocket hit her home near Tel Aviv; Nadin Awad, 16, an Arab Israeli killed along with her father when a rocket destroyed a car in Lod near Ben Gurion Airport; and Ido Abigail, a five-year-old boy who died from shrapnel injuries after a rocket hit the family’s apartment in the southern town of Sderot.

“Their families are shattered, heartbroken,” she said. “Ido, Leah and Nadin were all murdered by Hamas rockets bombarding Israel’s cities.”

House Speaker Nancy Pelosi, asked on Thursday if Israel has a right to defend itself, said yes:

I think the president took the appropriate proportionate response to it all. The fact is, is that we have a very close relationship with Israel, and Israel's security is a national security issue for us, as our friend, a democratic country in the region, that the president has restored the money to the Palestinians, $200 million, early in his administration.

So, there is a respect for meeting the needs of the Palestinians. But there is a Palestinian power struggle, and this is about Hamas. So, I wouldn't just label it Palestinian. I would say Hamas.

And Hamas is threatening the security of people in Israel. Israel has a right to defend itself. Many of our members of our caucus who are great friends of Israel, but understand also that we respect the--the self-determination, that we want a two-state solution in the region. But that doesn't give license to Hamas to bomb Israel.