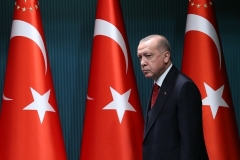 (CNSNews.com) – Ahead of President Biden’s planned meeting with his Turkish counterpart this month, U.S. Ambassador to the U.N. Linda Thomas-Greenfield met with senior officials in Ankara on Wednesday amid new signs of a Turkish willingness to cross its NATO allies in the conduct of its foreign policy.

A relationship soured by a long list of irritants will be in the spotlight when Biden and President Recep Tayyip Erdogan meet in Brussels on the sidelines of a NATO summit on June 14.

The White House in a brief statement last April said Biden and Erdogan in a phone call agreed to meet in Brussels “to discuss the full range of bilateral and regional issues.’

It also said Biden had conveyed “his interest in a constructive bilateral relationship with expanded areas of cooperation and effective management of disagreements.”

Those disagreements are many, and growing in number.

In late April, Turkey seethed over Biden’s decision to recognize the mass killings of Armenian Christians in Ottoman Turkey a century ago as “genocide.”

Three weeks later, Erdogan said Biden had “bloody hands,” in reference to U.S. support for Israel during its 11-day war with Hamas terrorists in Gaza.

And last week, Turkey reportedly pressed for the watering down of a NATO statement responding to the Belarus regime’s forcing of a commercial plane to land on its territory so it could arrest an exiled dissident onboard.

Reuters reported that, at Turkey’s insistence, references to sanctions or other punitive steps, including threats of a suspension of NATO’s cooperation with Belarus, were removed from the alliance statement.

NATO operates by consensus, so Ankara’s objections won out despite a pushback from Belarus’ neighbors, Lithuania, Latvia, and Poland.

Turkey’s Anadolu state news agency said they discussed the agenda for the Biden-Erdogan meeting, as well as “regional issues, including Syria, Libya, Afghanistan, Palestine, Iran, and Iraq, as well as the issues of migration, humanitarian aid, and the fight against terrorism.”

Turkey and the U.S. do not see eye to eye on several of those issues.

On Syria, Turkey was angered by U.S. support for Kurdish fighters linked to the separatist Kurdistan Workers’ Party (PKK).

In Libya the U.S. has been pressing for Turkey (and other outside players) to remove forces involved in the civil war, as required by an Oct. 2020 ceasefire agreement.

Concerning the Palestinian issue, Erdogan is an acerbic critic of Israel, is an ally of Hamas, a U.S.-designated foreign terrorist organization.

And with regard to “the fight against terrorism,” Erdogan views the U.S. as soft both on the PKK, and on the U.S.-based Turkish cleric Fethullah Gulen, whom Turkey calls a terrorist.

A readout of the Thomas-Greenfield-Kalin meeting, issued by the U.S. Mission to the U.N., did not mention specific areas of difference with Turkey, apart from saying the ambassador had “raised areas of concern to the United States, including limits on civil society and dissent in Turkey.”

Thomas-Greenfield had “emphasized the value the United States places on its strategic partnership with Turkey, our NATO ally,” it said.

Foundation for Defense of Democracies scholar Aykan Erdemir, a former member of the Turkish parliament, said Turkey’s move to dilute NATO’s condemnation of Belarusian President Alexander Lukashenko – an ally of Russian President Vladimir Putin – was “only the latest case of collusion between Ankara and Moscow to undermine NATO.”

“Erdogan’s latest rush to save Putin’s ally Lukashenko shows how far the Turkish president will go to express solidarity with his fellow strongmen in Russia and Belarus,” he wrote this week.

Erdemir said Biden should use his meeting with Erdogan “as an opportunity to remind the Turkish leader of the basic tenets and values of the transatlantic alliance.”

Turkey late last year became the first NATO ally to be targeted by U.S. sanctions, over its purchase of the Russian-made S-400 missile defense system in defiance of NATO and U.S. wishes.

The sanctions were imposed under the 2017 Countering America’s Adversaries Through Sanctions Act, which targets “significant” financial transactions with Russia’s military sector.

The S-400 dispute remains unresolved, with Turkey having given no indication of being prepared to change course.