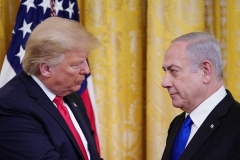 (CNSNews.com) – Drawing a striking contrast between the Trump administration and its predecessor, Secretary of State Mike Pompeo was expected on Thursday to became the first top U.S. diplomat to visit Jewish communities on disputed territory, claimed by the Palestinians and Syria’s Assad regime respectively.

Four years ago, the outgoing Obama administration was praised by the international community when it chose not to veto a U.N. Security Council resolution condemning Israeli settlements on “Palestinian Territory occupied since 1967.”

Although U.S. administrations have long viewed settlement activity in disputed territory as a potential “obstacle to peace,” the decision to abstain rather than kill the measure came as a parting blow to Israel and angered pro-Israel Americans, particularly as the text described areas including the location in Jerusalem of the holiest site in Judaism as “occupied Palestinian territory,” and called Israeli presence there “a flagrant violation under international law.”

Many Israelis view those areas, known for millennia as Judea (more than 800 references in the Bible) and Samaria (more than 110 references), as the Jewish nation’s historical and biblical “heartland.”

President Trump in late 2017 recognized Jerusalem as Israel’s capital, and exactly one year ago, Pompeo announced that the U.S. would no longer regard the existence of Israeli communities in disputed areas as inherently illegal under international law.

His unconfirmed plans for Thursday reportedly include visiting an Israeli winery between Jerusalem and Ramallah, located on territory claimed by Palestinians as part of a future independent state. He was also expected to visit the Golan Heights, the strategic ridge which Israel captured from Syria in 1967 and annexed in 1981. In a proclamation in March 2019, Trump formally recognized Israeli sovereignty over the Golan.

In a scathing column, the editor of the Palestinian news agency Maan, Nasser Al-Lahham, accused Pompeo as working “as a lowly servant of the Zionist movement,” and asked whether he was trying to earn “the title of the most trivial foreign minister in American history.”

Pompeo’s announcement last November to the effect that the U.S. will no longer view the existence of Israeli civilian settlements in the West Bank as “per se inconsistent with international law” came just days the European Union’s highest court mandated that goods produced in those locations should be labeled as such. The State Department said the court ruling would have the effect of advancing the anti-Israel boycott, divestments and sanctions (BDS) campaign.

Psagot Winery was the applicant in the Court of Justice of the European Union case and, after Pompeo days after its judgment made the announcement on legality, the winery as a gesture of appreciation produced a limited edition of a blended red wine named “Pompeo.”

“The U.S. administration’s message is extremely important and strengthens our ongoing fight against the boycott and hypocrisy campaign that the European Court of Justice has given,” the company’s CEO Yaakov Berg, said at the time.

This week Republican Sens. Tom Cotton (Ark.), Marco Rubio (Fla.), Kelly Loeffler (Ga.) and Ted Cruz (Texas), in a letter to Trump urged him to change U.S. policy to allow products made in Judea and Samaria to be labeled “Made in Israel.”

Even though Clinton-era guidelines requiring “Made in West Bank” labels were evidently not being enforced by U.S. authorities, they wrote, “we are concerned that a future administration could choose to enforce these rules and thereby differentiate Israeli goods produced in Judea and Samaria, making them prime targets for BDS boycotts.”

Dumping the guidelines, the senators said, “would be yet another achievement by your administration that would support Israel and would push back against anti-Semitism and the BDS movement.”