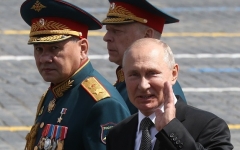 Berlin (CNSNews.com) – Amid declining polls, Russian President Vladimir Putin addressed a military parade on Wednesday, ahead of a vote that could pave the way for him to remain in office until 2036.

The parade, commemorating the 75th anniversary of Russia’s victory over Nazi Germany, went ahead despite rising cases of COVID-19, one day before a referendum on 220 proposed changes to the 1993 national constitution.

First announced in January and backed by parliament and Russia’s highest court, proposed changes include adding text about preserving “belief in God” and constitutionally defining marriage as a union between a man and a woman.

Among the amendments is one that would “reset” presidential term limits, effectively allowing Putin to run for two more six-year terms after his current two terms end in 2024. Another provides presidents with immunity after leaving office.

Putin has avoided directly answering whether he would run again under the new arrangements, should they be approved, although he says he had not “excluded” the option.

“We will see, things will be clearer later,” he told state television on Sunday, but also strongly rejected any talk of appointing a successor.

“If this doesn’t happen, many levels of government would begin prowling for possible successors,” Putin said, in apparent reference to the proposed amendment. “People need work, not successors.”

On Monday, presidential spokesman Dmitry Peskov said Putin’s statement was “not connected with the president’s replaceability or irreplaceability.”

International critics view the constitutional amendments as an effort by Putin to block change in a country which has been struggling economically under sanctions imposed after it annexed Ukraine’s Crimea peninsula in 2014. The coronavirus pandemic has added to Russia’s economic woes.

The government has hit back at foreign media outlets for critical coverage, placing Germany’s Deutsche Welle and the Voice of America under investigation for what it calls political interference.

“These acts indicate systematic attempts to influence Russia’s internal affairs from outside and to influence the will of our country’s citizens, which is unacceptable and cannot be left unanswered under applicable law,” government anti-corruption committee chairman Vasily Piskarev said on Wednesday.

Putin’s popularity rankings have slipped in recent time, apparently relating to his handling of the pandemic. Russia is reporting the third highest number of COVID-19 cases, after the U.S. and Brazil.

A recent poll by the independent pollster Levada Center found that 59 percent of Russian respondents retain trust in the president, down from 69 percent in February, before coronavirus cases spiked. It is the first time Putin’s ratings dipped below 60 since he first took office as prime minister in 1999.

Another Levada poll found 47 percent of the population in favor of the constitutional amendments, 31 percent against, and 22 percent undecided.

Analysts expressed skepticism over the legitimacy of the referendum, given that it is not legally binding, and parliament has already approved the proposed amendments.

Nicolae Reutoi, a senior associate at London-based business intelligence consultancy Alaco, said the vote serves as a way to lend the impression of legitimacy.

“The only proposal that matters, at least to the incumbent leader and his inner circle, is the one that allows him to stay in power beyond 2024 when, according to the current constitution, he loses the right to run again,”  he wrote in an op-ed for Geopolitical Monitor.

“There is little doubt that the changes will be passed, but Putin will want the margin of victory to be convincing,” Reutoi said, noting that it comes at a critical time, given Putin’s worst-ever approval ratings.

Sergey Radchenko, a Cold War historian and the director of Cardiff University’s School of Law and Politics, said the referendum was merely symbolic, providing “a veneer of legitimacy.”

“Putin still perceives himself as a ‘democrat,’ so he wants to have a legal mechanism in place to legitimize the continuation of his rule,” he told euronews on Wednesday. “Since the Russian electoral system is known for widespread falsifications, the result is preordained – whatever the public thinks.”

Should the gambit fail, the government would likely resort to alternative tactics, he said, pointing to “manipulation and ballot-box stuffing” in past elections.