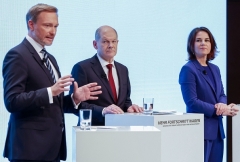 Incoming German Chancellor Olaf Scholz (Social Democrats), center, with leader of the Free Democratic Party Christian Lindner, who will become finance minister, and Annalena Baerbock of the Greens, who is set to become foreign minister. (Photo by Odd Andersen/AFP via Getty Images)

Berlin (CNSNews.com) – The three parties making up Germany’s new ruling coalition for the post-Merkel era are calling for a strong transatlantic partnership while signaling a firmer stance on China.

“The transatlantic alliance is a central pillar and NATO an indispensable part of our security,” says the 178-page coalition agreement between the center-left Social Democrats (SPD), the Greens, and the pro-business Free Democrats (FDP), released on Monday.

“We advocate a renewal and dynamization of transatlantic relations with the USA and Canada,” it states.

The coalition agreement, reached after eight weeks of intense negotiations, also pledges to “increase Europe’s strategic sovereignty,” with a foreign, security and development policy that is “value-based and more European.”

The agreement is notable for its departure from outgoing Chancellor Angela Merkel’s more passive, “business-friendly” approach to China, describing China as both a “partner” and a “systemic rival.”

“In order to be able to realize our values and interests in the systemic rivalry with China, we need a comprehensive China strategy in Germany within the framework of the joint E.U.-China policy,” it says.

The FDP and Greens in particular were more openly critical of Beijing in the lead up to the September election. Greens co-leader Annalena Baerbock is set to serve as foreign minister.

Last week, China warned Germany not to interfere in what it calls its domestic affairs.

Helmut Anheier, a sociology professor at the Hertie School and adjunct professor at the University of California Luskin School of Public Affairs, said the coalition agreement reflected “a far bolder Germany.”

“On foreign policy, the most notable shift relates to China,” he said in an op-ed. “Apparently, the world should expect Germany’s new government to replace Merkel’s business-first strategy with a more assertive approach to authoritarian regimes.”

“Merkel was known for her ultra-cautious leadership style. During her 16 years at the helm of Germany’s government, few reforms were enacted – and even fewer succeeded. Now, Germans seem to be ready for a more proactive government,” he wrote.

Anheier said the government now faces the difficult task of living up to its ambition.

“If the coalition fails, Germany will risk reverting to its old habit of doing too little too late – an outcome that would jeopardize its position in Europe and the world,” he said.

Greens politician Reinhard Bütikofer, formerly the party’s federal chairman, said Merkel’s China policy was “out of date” in light of an increasingly authoritarian government in Beijing.

“She didn’t really take Xi Jinping’s reality seriously,” Bütikofer said. “We want peace and stability in the Strait of Taiwan and not aggression.”

“The blurring between the interests of business and human rights – that is no longer possible,” he said. “The new coalition will change that.”

Bütikofer was among a small group of E.U. officials banned from entering China in response to E.U. sanctions over the suppression of minority Muslim Uyghurs.

Bütikofer, who participated in coalition negotiations in a working group on foreign policy, defense, development cooperation and human rights, said Germany would continue to try and work with China, but “on the basis of human rights and international law.”

He stressed the renewal and strengthening of the transatlantic relationship – although he did not explicitly connect it to China policy.

“When it comes to the transatlantic relationship, we’re not only talking about partnership, but also about friendship with the United States,” he said.

The director of the Institute of German Economy, Michael Hüther, said it was important that the transatlantic partnership again plays a greater role in the systemic conflict with China, as neither the E.U. nor the U.S. will manage it alone.

Since taking office, President Biden has been calling on Europeans to stand up against China’s troubling trade practices.

Jackson Janes, a senior fellow at the German Marshall Fund of the U.S., said there was a definite trend in German public opinion toward a more critical view of China.

At the same time, however, “there is less enthusiasm about framing the relations with China as Cold War 2.0. Germany has a huge chunk of its economy wrapped around  China. So rival or competitor, it will be a challenge to get in sync with the U.S. in a more direct challenging mode.”

Janes said Russia and the controversial Nord Stream 2 natural gas pipeline project would be an immediate test for the incoming chancellor, the SPD’s Olaf Scholz.

“I think the NS2 dilemma will continue to be a problem even if it wasn’t mentioned in the agreement,” he said. “But much depends on also Russian behavior now in Ukraine, and on U.S. pressures regarding sanctions.”

Janes added that while the coalition agreement sent a clear message stressing dialogue across multiple sectors, it nevertheless emphasized that everything should be coordinated within the E.U.

The coalition agreement was relatively restrained regarding Russia, describing only a “multifaceted” relationship while recognizing the importance of “stable” relations.

It was more strongly worded regarding current tensions with Belarus, however, stating “Russian interference in favor of [President Alexander] Lukashenko is unacceptable,” and pledging to seek further sanctions on Minsk following the disputed election outcome and crackdown on protestors, journalists, and opposition politicians.