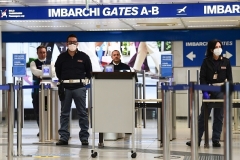 Police officers at Linate airport in Milan, Italy during the lockdown. (Photo by Miguel Medina/AFP via Getty Images)

Berlin (CNSNews.com) – After months of internal debate, the European Union’s Council has recommended opening the E.U.’s external borders after the coronavirus shutdown to a select list of 14 countries, with the United States, Russia and Brazil not making the final cut.

“Member-states should gradually lift the temporary restriction on non-essential travel to the E.U. as from 1 July 2020,” it said in a statement on Tuesday.

The partial border reopening coincides with Germany’s first day of assuming the rotating presidency of the E.U., succeeding Croatia. Berlin’s initial plans to make climate change its main focus have been overshadowed by the pandemic.

“The virus must be contained, the European economy rebuilt and social cohesion strengthened in Europe,” the government said in a statement of its presidency objectives.

China has been added, although only on the condition it reopens its borders to European travelers too.

Member-states by a qualified majority approved the final list on Tuesday, after it was whittled down from an initial list of 54 countries.

The countries listed were selected based on various criteria. Their number of new COVID-19 cases reported over the last 14 days per 100,000 inhabitants had to be close to, or below, the average across the E.U.

To make the cut, countries also had to have a stable or decreasing trend of new cases. Other factors related to levels of testing, contact tracing, reporting, and the reliability of the information provided.

However, the European Council noted that other factors were also pertinent, an apparent reference to growing pressures to reopen ravaged economies ahead of the summer tourist season.

“Reciprocity should also be taken into account,” it said, as “well as economic and social considerations.”

The recommendation is not legally-binding, and individual member-states are responsible for implementing it – or choosing not to do so.

Already, some have indicated plans to make adaptions. For instance, Greece is set to reopen its borders on July 1 with Turkey, which is not on the recommended list. Turkish government ministers are due to visit Germany in a bid to negotiate a reopening of travel with Germany, home to a large Turkish-origin population.

Others have opted to remain closed for now. Sweden, whose unconventional approach to coronavirus health measures saw it hit harder than its Scandinavian neighbors, has decided to retain its ban on external travelers until July 7.

E.U. officials have stressed that compilation of the list – which will be regularly assessed and updated – is not politically motivated, but based on facts and epidemiological criteria.

“This is not an exercise to be nice or unfriendly to other countries,” Spanish Foreign Minister Arancha Gonzalez Laya told a Spanish radio station ahead of the list’s publication. “This is an exercise of self-responsibility.”

In response to a question, Gonzalez Laya said she wasn’t aware of pressure from the U.S. to reopen travel to Americans.

The U.S. Mission to the E.U. sounded a positive note.

“We appreciate the transparency and concerted efforts of our European partners and allies to combat this pandemic,” it said. “We are committed to coordinating with them as we look forward to reopening our economies and easing restrictions.”

The U.S. and E.U. closed their borders to each other in early March. More than 15 million Americans travel to Europe a year, and around 10 million Europeans to the U.S.

The U.S. remains the country worst affected by the pandemic, with more than 127,000 deaths out of a global total of some 509,000, according to Johns Hopkins University data.

Also excluded from the list are Brazil and Russia, with the second- and third-largest number of confirmed COVID-19 cases respectively. Brazil has also reported the second-highest death toll – more than 58,000 deaths – although Russia has reported far fewer deaths (9,300) than the worst-hit European countries, Britain, Italy, France and Spain.