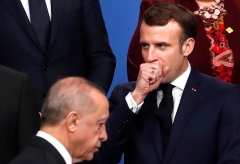 Paris (CNSNews.com) – The ongoing turmoil in Libya is fueling a rift between French President Emmanuel Macron and his Turkish counterpart, with Macron accusing President Recep Tayyip Erdogan of importing large numbers of “jihadists” from Syria into the North African country.

Speaking alongside German Chancellor Angela Merkel after talks on Monday, Macron slammed what he called “criminal” intervention in Libya by “a country that claims to be a member of NATO.”

He accused Erdogan of violating commitments made during a Libya conference in Berlin last January.

“He has increased his military presence in Libya and massively brought [in] jihadist fighters from Syria,” Macron said, likely referring to radical Islamist groups backed by Turkey in northern Syria.

As with Syria, the Libyan civil war has drawn in open and covert intervention from a number of outside players, driven by various agendas.

Turkey, along with Qatar, supports the U.N.-recognized Government of National Accord (GNA), based in Tripoli and led by Prime Minister Fayez al-Sarraj.

Egypt, the United Arab Emirates, and Russia – through the use of private military contractors – are backing Khalifa Haftar, a renegade military officer whose forces control eastern parts of the country, but have recently lost ground in their battle against the GNA.

Turkey and the UAE are among those accused of violating a U.N. arms embargo.

Turkey and Russia in particular are both viewed as seeking to strengthen their influence in Libya and the broader region.

France denies supporting Haftar against al-Sarraj, although France did support Haftar militarily in the past against Islamist militants in Libya.

At the Berlin conference in January, participating countries put their names to a “firm commitment to the sovereignty, independence, territorial integrity and national unity of Libya.”

“Only a political process defined and led by the Libyans themselves can end the conflict and bring lasting peace,” the pledge stated.

“Al-Sarraj is a front man for the Libyan Muslim Brotherhood, Erdogan, and Qatar, which are toxic for the region, as they have proven many times,” said Roland Lombardi, an analyst specializing in the Maghreb and Middle East region.

“This axis is rejected in the Arab world by leaders such as Egypt’s Sisi and Saudi Crown Prince Mohammed bin Salman, and also by the populations of those countries.”

Lombardi said Haftar’s supporters have made clear that “they will never let their enemies, the Muslim Brotherhood allied to al-Sarraj, and especially the Turks, take root in Libya.”

As for France, he said although Paris formally still recognizes al-Sarraj, it is playing “a double game,” preferring to see a stable Libya under a strongman like Haftar, in the belief that would help improve security in the Sahel, “which has been greatly destabilized by Libyan chaos.”

(Since 2014, French troops have carried out an anti-terror operation against Islamist groups in the Sahel region.)

Lombardi said Erdogan’s aggressive policy has so far paid off, with “his status as a member of NATO giving him a sort of immunity.”

Adding to tensions, in mid-June France and Turkey accused each other of dangerous maneuvers involving their warships in the Mediterranean, prompting NATO secretary-general Jens Stoltenberg to open an investigation into the incident between the two purported allies.

Turkey’s relationship with NATO allies is already under strain over its purchase of a Russian missile defense system despite strong U.S. and European objections.