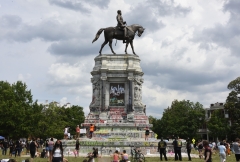 Protesters climb on the base of the statue of Confederate General Robert E. Lee on Monument Avenue on June 6, 2020 in Richmond, Va. (Photo credit: Vivien Killilea/Getty Images)

The Confederacy has been the excuse for some of today's rioting, property destruction, and grossly uninformed statements.

Among the latter is the testimony before the House Armed Services Committee by the Chairman of the Joint Chiefs of Staff General Mark Milley in favor of renaming Confederate-named military bases. He said: "The Confederacy, the American Civil War, was fought, and it was an act of rebellion. It was an act of treason, at the time, against the Union, against the Stars and Stripes, against the U.S. Constitution."

There are a few facts about our founding that should be acknowledged. Let's start at the beginning, namely the American War of Independence (1775-1783), a war between Great Britain and its 13 colonies, which declared independence in July 1776. The peace agreement that ended the war is known as the Treaty of Paris signed by Benjamin Franklin, John Adams, John Jay, and Henry Laurens and by British Commissioner Richard Oswald, on Sept. 3, 1783. Article I of the Treaty held that "New Hampshire, Massachusetts Bay, Rhode Island and Providence Plantations, Connecticut, New York, New Jersey, Pennsylvania, Delaware, Maryland, Virginia, North Carolina, South Carolina and Georgia, to be free sovereign and Independent States."

Delegates from these states met in Philadelphia in 1787 to form a union. During the Philadelphia convention, a proposal was made to permit the federal government to suppress a seceding state.

James Madison, the Father of the Constitution, rejected it.

Minutes from the debate paraphrased his opinion: "A union of the states containing such an ingredient [would] provide for its own destruction. The use of force against a state would look more like a declaration of war than an infliction of punishment and would probably be considered by the party attacked as a dissolution of all previous compacts by which it might be bound."

During the ratification debates, Virginia's delegates said "the powers granted under the Constitution being derived from the people of the United States may be resumed by them whensoever the same shall be perverted to their injury or oppression."

The ratification documents of New York and Rhode Island expressed similar sentiments; namely, they held the right to dissolve their relationship with the United States. Ratification of the Constitution was by no means certain. States feared federal usurpation of their powers. If there were a provision to suppress a seceding state, the Constitution would never have been ratified. The ratification votes were close with Virginia, New York, and Massachusetts voting in favor by the slimmest of margins. Rhode Island initially rejected it in a popular referendum and finally voted to ratify — 34 for, 32 against.

Most Americans do not know that the first secessionist movement started in New England. Many New Englanders were infuriated by President Thomas Jefferson's Louisiana Purchase in 1803, which they saw as an unconstitutional act. Timothy Pickering of Massachusetts, who was George Washington's secretary of war and secretary of state, led the movement. He said "the Eastern states must and will dissolve the union and form a separate government." Other prominent Americans such as John Quincy Adams, Elbridge Gerry, Fisher Ames, Josiah Quincy III, and Joseph Story shared his call for secession. While the New England secessionist movement was strong, it failed to garner support at the 1814-15 Hartford Convention.

Even on the eve of the War of 1861, unionist politicians saw secession as a state's right.

Rep. Jacob M. Kunkel of Maryland said "any attempt to preserve the union between the states of this Confederacy by force would be impractical and destructive of republican liberty."

New York Tribune (Feb. 5, 1860): "If tyranny and despotism justified the Revolution of 1776, then we do not see why it would not justify the secession of Five Millions of Southrons from the Federal Union in 1861."

The Detroit Free Press (Feb. 19, 1861): "An attempt to subjugate the seceded States, even if successful, could produce nothing but evil — evil unmitigated in character and appalling in extent."

The New York Times (March 21, 1861): "There is a growing sentiment throughout the North in favor of letting the Gulf States go."