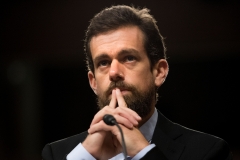 All they needed was an opening. And for the rich extremists at the helm of the West's social media, last Wednesday's riot gave them one. The purging of conservative expression has begun. We knew it was coming -- just as we've always known it will take every one of us to stop it.

Most Americans thought they understood censorship. They've watched it evolve and expand this last decade, scooping up more people in its nets in the name of "tolerance," "diversity," and "non-violence." But what happened this weekend was not a tweet blocked here or an account suspended there. No, this was much more ominous. What Twitter, Facebook, Google, and Amazon did by locking out the president wasn't just a heavy-handed punishment of Donald Trump and his supporters -- it was a scorched-earth campaign against the tens of millions of people who dare to think differently than they do and the open forums that give our movement a voice.

"Amazon will be shutting off all of our servers," Parler's John Matze announced to stunned surprise on Saturday. It was the second major bombshell to drop in the new war between Big Tech and the other half of the country. After what seemed like careful, behind-the-scenes coordination from Silicon Valley's chiefs, the popular alternative to Twitter was scrubbed from the Apple store, Google Play, and any other place users could download the app.

"We will try our best," Matze insisted, "to move to a new provider...." But in the meantime, the message to conservatives is clear: Big Tech isn't just coming for Trump. They're coming for all of us -- and corporate America isn't far behind.

The Tech giants used the claim that Parler allowed its platform to be used to advocate and coordinate violence at the capitol last week. If there was ever a case of the pot calling the kettle black, this is it. Homeland Security was forced to weigh-in this past summer in a letter to the social media giants saying the popular platforms appeared to play a role in facilitating "burglary, arson, aggravated assault, rioting, looting, and defacing public property."

Then why are they holding Parler to a different standard?

Oh, but there's more hypocrisy. Twitter and Facebook permanently booted President Trump because he refuse to accept an election fraught with irregularities, but they don't mind giving the Ayatollah Khamenei a channel to spew his hate. This isn't about upholding any rules. This is about cutting off the oxygen to free speech on the Right.

And the domino effect -- banishing people from other parts of the public square -- is already starting. Forbes' Randall Lane warns that a "truth reckoning" is coming for anyone who hires or associates with former Trump staffers. Other extreme organizations are already gathering names and data for the blacklist. Then, there are Joe Biden's allies, like Mozilla CEO Mitchell Baker, who says that "deplatforming" conservatives or crushing the alternatives they flock to isn't enough. This crusade needs to move beyond "temporary silencing or permanent removal of bad actors from social media...." Some of that is already starting. The Federalist's Joy Pullmann appears to have two words for any freedom-loving patriot in America: brace yourself.

Everyone from local law enforcement to the National Association of Realtors (NAR) is trying to smoke out conservatives from their ranks. The NAR has even gone so far as to "revise" its professional ethics code so that employees on the clock and off can be held accountable for any expression they consider intolerant.

"To them hate speech includes basic conservative ideas, not at all actually racist or otherwise indefensible words," says Pullmann.

In some areas, police departments have opened official investigations to see if anyone on their payrolls attended the Jan. 6 protest. In other offices, employers are flat-out firing people who attended the rally -- even if they were part of the peaceful majority. And Biden's friends on the extreme Left still aren't satisfied. They want even more retribution.

This is not just an attack on free speech. This is an attack on an entire movement of people with the intent of driving them underground -- keeping them from getting jobs, having legal representation, and even cutting them off from legitimate financial transactions like Stripe has done with the Trump campaign and reportedly with organizations like the American Family Association. Of course, all of this blacklisting comes from the hypocrites on the Left who say living wages are a "human right" -- along with attorneys, health care, and the other things they're so eager to deny us.

Making matters worse, the Left doesn't fight like conservatives. They won't stop until all resistance is vanquished, and they assume total control of the narrative. And, as we've seen, they'll use any legitimate and illegitimate means to accomplish it. So, what do we do? Refuse to be intimidated, for one. The worst mistake we can make as Christians is to panic or roll over and give in to the censorship. As powerful as the Left's on-off switches are, they're nothing compared to God. At the end of the day, "You can't pull the plug on Jesus," as Phil Robertson insisted.

Could this be a time of real testing?

"Jesus said before he comes back, it's going to be as it was in the days of Sodom and Gomorrah," Pastor Jack Hibbs reminded us on Thursday. "And prophetically speaking, we know that [those] days are coming. Jesus said they're going to come. In America, we've had it very easy for a long time. And that doesn't mean we give up. It means that we get ready. The church is being purified. It happened during COVID, and the next chapter is [starting]. And we need to stand." Friends and family of faith, Jack said, get ready. "Get into your Bible like you never have before. Don't mess around. If you don't go to a Bible-teaching church, you need to find one, quick, that applies God's word to the world in which we live."

There is nothing new under the sun, Ecclesiastes says. And while there may not have been Twitter in King Solomon's day, there was evil. Then, as in now, God's people need to spend less time on Facebook and more time on their face before God. If you haven't been a part of my organization Family Research Council's two-year Bible reading program, jump in right now. God's word is profoundly speaking to His people in these difficult days.

"Hear me, you who know what is right, you people who have taken my instruction to heart," we just read in Isaiah 51, "Do not fear the reproach of mere mortals or be terrified by their insults." Do not, he urges, "forget the Lord your Maker, who stretches out the heavens and lays the foundation of the earth."

In other words, don't fear the insults and threats of those who are here today and gone tomorrow. Rather put your trust in the word of God; it may not always be popular with the world, but it has stood the test of time and it will continue to be a foundation we can stand on. That's the kind of faith that can be contagious. That's the kind of faith that can set an entire congregation, community, and nation free.