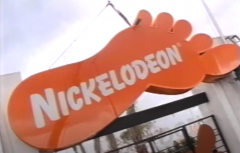 Featured is a sign out front of the Nickelodeon Animation Studio in 1998. (Photo credit: YouTube/Nickelodeon Cartoon Universe)

What is the fastest way to alienate a sizable fanbase and scuttle the reputation of a longstanding entertainment icon? Saturate it with obnoxious, woke, political messaging.

The latest program to adopt this strategy is Nickelodeon, which, after watching Disney send Star Wars into a tailspin, said "hold my Kool-aid." After Nickelodeon promoted LGBT Pride Month for the first time in 2020, it decided to up the ante, as if everyone knows children's programs need more sexual content. Unsaintly Nick has introduced LGBT characters to shows including "Blue's Clues & You!," "Spongebob Squarepants," "Rugrats," "The Adventures of Korra," "Henry Danger," "Rocko's," and "The Loud House."

Meanwhile, Nickelodeon has lost two-thirds of its viewers over the past four years. As Breitbart reporter John Nolte summarized, "In July of 2017, Nickelodeon was averaging around 1.2 million viewers per week. Since February of this year, the channel has not been able to push its average viewership over 400,000. Last month, the numbers crashed as low as just 328,000." Nowhere along this catastrophic slide did the writers or curators of Nickelodeon's content stop to consider whether their ratings train wreck had anything to do with their foisting LGBT ideals on impressionable young viewers.

But the story gets more absurd. Last month, Nickelodeon chose not to air an episode titled "Kwarantined Krab," which featured an outbreak of "Clam Flu," because of the controversial and sensitive nature of the topic. That fact alone doesn't matter much one way or the other. What's shocking, however, is that Nickelodeon is willing to self-censor an episode with sideways allusions to the COVID-19 pandemic as too controversial and sensitive to broadcast to children, but it has no problem promoting Pride Month, writing songs about Pride Month, introducing an entire rainbow of LGBT characters, or exposing children to drag queens. As kids' cartoons are no longer child-safe, it's no wonder that parents are changing the channel.

Admittedly, some of Nickelodeon's drop in viewership is simply a result of viewers switching away from cable, which has afflicted all kids' networks. But you would expect, when a company encounters hard times, it would try its hardest to keep every customer it can. Instead, Nickelodeon has gone out of its way to alienate its primary market. Promoting LGBT Pride is one thing. Promoting it explicitly to young children is a bridge too far for many parents.

As LGBT activists target their agenda to increasingly younger audiences, parents have grown increasingly concerned about the effect they can have on their children. Pandemic lockdowns accelerated this by helping families spend more time together, alerting parents to the LGBT indoctrination taking place in schools. Parents concerned about their children are now organizing to fight back, running for school board, and speaking out. Earlier this year, the Arkansas legislature passed the SAFE Act, a first-of-its-kind law to protect children from dangerous, life-altering transgender hormones and surgeries. Most parents would rather raise their children peaceably than wade into the messy conflict of politics. But when continued and systematic attempts to indoctrinate their children provoke them to action, they become unstoppable warriors.

The Left can't resist overplaying its hand, or buckling to the backlash. This year, we've already been witness to leftist threats that have backfired. Corporations took a major black eye from criticizing Georgia's new election law before they realized it actually expanded voting access, while making elections more secure. The NCAA took a pie to the face when it backed away from its threat to remove tournaments from states that protected women's sports -- because too many states ignored it. Now, parents are punishing Nickelodeon's woke programming by changing the channel.