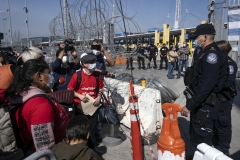 A small group of asylum seekers (L), ask for asylum at the border during a protest against Title 42 policy on the Mexican side of the San Ysidro Crossing port in Tijuana, Baja California state, Mexico, on March 21, 2022. (Photo credit: GUILLERMO ARIAS/AFP via Getty Images)

Under Barack Obama, 1,000 people a day "overwhelm[ed] the system." Anything over 4,000 was considered a "crisis." So what does Joe Biden call 7,100 illegal border crossings every 24 hours? Just the beginning, apparently.

The White House, determined to take sole ownership of the "worst administration ever" mantle, has decided to turn the catastrophe at the border up to doomsday levels by lifting the COVID restrictions that kept some migrants at bay. Starting May 23, agents warn, a million crossings every six months is going to sound like a dream scenario compared to what's coming.

"Have you watched some of the footage of what goes on just on the other side of the border?" House Minority Leader Kevin McCarthy (R-CA) asked reporters. "Looks like it comes from Ukraine."

And it's only going to get worse. If Biden overturns Donald Trump's Title 42, which allows the U.S. to turn away illegal immigrants because of the "communicable disease threat," America is facing a nightmare of "cataclysmic" proportions, experts warn. According to documents, Homeland Security is preparing for 18,000 illegal encounters a day once the rule is overturned -- double the record highs we're seeing now.

To states like Arizona, Texas, and California, "it is essentially throwing gasoline on a fire," state Attorney General Mark Brnovich (R-AZ) shook his head. And it's not just the border states who would suffer, he pointed out on "Washington Watch."

"We know that there's a record amount of fentanyl and methamphetamine flowing into our country...and it is estimated that if Title 42 is rescinded, more than 500,000 people -- in addition to the [ones] already illegally crossing -- will cross.... That's literally like the population of Kansas City, Miss. or Baltimore, Md. coming across in one month."

"And what's happening now," he explains, is that "people charged with serious crimes [and] convicted of serious crimes are just being released into our community....I's, quite frankly, making our country more dangerous. And it's just unfair to hardworking American taxpayers."

That's what drove Brnovich -- along with his counterparts in Missouri and Louisiana -- to sue. Like everyone else who sees the writing on the wall, they're desperate to stop the Biden Administration from removing the one remaining tool our border patrol has to stem the tide. Based on the best estimates, our agents have invoked Title 42 more than 1.7 million times since 2020. If it goes, America could be staring down a literal stampede at the border, which is yet another storyline Democrats can't afford.

But there's nothing like an election to snap some sense into Biden's party, which is suddenly desperate to save Title 42. Even extremists like Senator Raphael Warnock (D-GA) raced to get on the record opposing Biden's plan.

"This is not the right time," he argued, "and we have not seen a detailed plan from the administration. We need assurances that we have security at the border and that we protect communities on this side of the border."

Manchin called the president's plan "frightening," reminding everyone that "we are nowhere near prepared to deal with [the] influx."

"Until we have comprehensive, bipartisan immigration reform that commits to securing our borders and providing a pathway to citizenship for qualified immigrants," he argued, "Title 42 must stay in place."

Senator Mark Warner (D-VA) piled on, insisting that he would be "very reluctant for the administration to end this Trump policy until we [have] a real plan in place." "I think we are a generous country, but we have to be a country of [the] rule of law."

Funny, Brnovich pointed out, that's what Republicans have been saying all along. Immigrants want to come here because America cares about the rule of law, he said. "And what the Biden Administration is doing is -- quite frankly -- undermining" it. Worse, he argues, Biden is incentivizing lawlessness either indirectly by removing the consequences or directly by offering things like welfare benefits. "It's an insane policy....I mean, literally, the Democratic Party has gotten so left. We've gone in 50 years from John F. Kennedy wanting to put a man on the moon to Joe Biden wanting to put a felon in everyone's neighborhood."

And, of course, the thing that really gets under Americans' skin is the outright hypocrisy. If Democrats are declaring an end to the pandemic at the border, why not everywhere? Why are passengers still required to wear masks on planes? Why are members of our military still forced to get vaccinated against their will? And why is Congress considering a $10 billion package in COVID relief for a virus that the White House insists doesn't exist anymore?

Obviously, the permanent solution to this crisis isn't Title 42. It's sound immigration policy that secures our border. Americans wouldn't be having this debate if Democrats had kept the ideas that were working in place. Instead, in a pathetic attempt to please his open-borders radicals, Biden threw out every commonsense strategy that kept the problem under control. But then, Brnovich wonders, maybe that was the point. If the Left wants to centralize power in Washington, D.C., then "I think part of that strategy" "is to overwhelm the system...and essentially make [these people] dependent on a central authority."

But until the Democratic Party succeeds in trampling our entire system of government, they still have to follow the law. If they want to change a policy, then there are rules for that.

"After all, [Biden's] not a king," Brnovich points out. "He's not a dictator." And if taking him to court is the only thing that will drive that point home, so be it. The borders of Biden's authority are just as important as the country's borders he ignores.