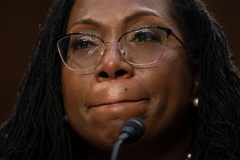 Featured is Judge Ketanji Brown Jackson at the Senate Judiciary Committee confirmation hearing on her nomination to become an associate justice of the U.S. Supreme Court. (Photo credit: JIM WATSON/AFP via Getty Images)

Reporters walking to the Senate Judiciary Committee for the first round of Ketanji Brown Jackson hearings must have wondered if they were lost. There were no protesters, no "handmaidens," no overwhelming presence of Capitol Police. Four years ago, in the disgrace that was Brett Kavanaugh's hearing, there were 22 arrests before 11 a.m. Two years later, on Amy Coney Barrett's first day, 21 people were handcuffed before the session even started. Without the Left's screaming, tantrums, and constant disruptions against a Republican nominee, it hardly feels like a modern Supreme Court confirmation debate.

"We're tired of it," Senator Lindsey Graham (R-SC) said about the treatment of past Republican nominees. Turning to the judge affectionately dubbed KBJ, he promised, "It's not going to happen to you." And several hours into the questioning, it hasn't. Jackson is getting the respect that Kavanaugh and Barrett deserved.

"It just appalls me," Graham went on, "that we can have such a system in America that if a conservative woman wants to stand out and say, 'I love my family' -- just as much as you love yours -- and [her] faith means just as much to [her] as it does you, that all of the sudden they're some kind of weirdo." If she were an African-American conservative, he assured her, she would be "fair game" to have her "life turned upside down, to be filibustered" -- no matter how qualified she may be.

But then, that's the hypocrisy of the Democratic Party. There's one standard for the Right, and one standard for the Left. The norm ought to be civility and open debate, National Review contributing editor Andrew McCarthy agrees -- not character assassination: "Unless and until (a) Democrats end that destructive practice and (b) we arrive at a broad bipartisan agreement about the proper role of judges, it is not possible to have a consensus that intelligent, competent people of truly excellent character should be confirmed."

For now, it seems, character isn't the issue -- judicial philosophy is. In several exchanges, Jackson seemed to be toeing the White House line on everything from life to transgenderism. When Sen. Marsha Blackburn (R-TN) asked her to define what a "woman" is, she replied, "I can't." Blackburn looked at her as if she didn't hear correctly. "You can't?" "I can't," Jackson insisted. "Not in this context. I'm not a biologist." Stunned, the senator fired back, "The meaning of the word 'woman' is so unclear and controversial that you can't give me a definition?" Jackson answered, "Senator, in my work as a judge, what I do is address disputes. If there's a dispute about a definition, people make arguments, and I look at the law -- and I decide."

Of course, as most Americans would say, you shouldn't need to look at the law to know what a woman is. But Jackson's failure to answer such a basic question should give Republicans plenty of pause about the ways she would resolve the heated debate over transgenderism.

"It also shows how Democratic identity politics works in hilariously self-contradictory ways," National Review critic-at-large Kyle Smith pointed out. "Jackson was nominated because she is a black woman in a move that Democrats thought would be a grand slam for identity politics, but meanwhile Democrats can't define what either of those identities actually means...."

On abortion, she was similarly vague.

"When does life begin, in your opinion?" Sen. John Kennedy (R-LA) asked. The judge answered, "Senator, I don't know....I have personal religious and otherwise beliefs that have nothing to do with the law, in terms of when life begins." When she's ruling on cases, Jackson added, she sets those views aside. Kennedy tried a different approach, inquiring when Jackson believes equal protection of the law applies to human beings. "I actually don't know the answer to that question," the nominee told him. "I'm sorry." Not as sorry as the millions of unborn humans who thought that truth was "self-evident."

For Christians, one of the more disquieting moments came when Sen. John Cornyn (R-TX) invoked the Obergefell ruling, which invented a right to same-sex marriage in 2015. He asked Jackson if Americans should be able to embrace natural marriage as a matter of religious freedom. "Well, senator, that is the nature of a right," the nominee responded. "When there is a right, it means that there are limitations on regulation even if it means people are regulating pursuant to their sincerely held religious beliefs."

"She didn't seem to even recognize that there is a tension between the rightly-held religious belief that marriage is between a man and a woman versus the Obergefell decision handed down by the Supreme Court. There certainly is a tension, and that tension is being manifested every day in our country." She pointed to cases where Christians are being forced to do things like bake cakes for same-sex weddings. The freedom of religion has been a "deeply and sincerely held" right for much longer than this new Obergefell decision, Johnson argued. "And the fact that she simply only wanted to address that [same-sex marriage] is a right, and [no] deeply-held religious view can infringe upon that [shows that] she does not even remotely understand the views of millions of Americans...."

On the bright side (if there is a bright side), some conservatives seemed pleased that Jackson at least pretended to embrace the concept of originalism. More than once, she harkened back to "original documents" and "original meaning" for "interpreting the text." In one of her more remarkable statements, Jackson could have been mistaken for Ed Meese.

"I do not believe that there is such a thing as a living Constitution" that changes over time, she said. Instead, she would be "looking at the text at the time of the Founding" as a constraint on judicial innovation. She would focus on "what that meant to those who drafted it."

Whether she means it or not, we'll find out. But when "senators ask Judge Jackson in a nationally televised hearing to explain how judges should read the Constitution, in a hearing for a job to which she can be confirmed entirely with Democratic votes, she sounds an awful lot like Scalia..." NRO's Dan McLaughlin points out. And to most observers, that's a political victory in itself. Regardless of whether the Left's nominee follows through, she understands: the right answer is still the original one.