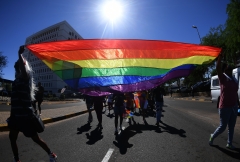 The Left doesn't mind when China controls the conversation, but they sure care when American parents do. That's the incredible hypocrisy of the Florida law hysteria. Woke CEOs are pitching a fit that states want to silence talk of sex and gender for kindergarteners, but if China wants to censor it? One entertainment group says: no problem.

It's the irony of ironies. Warner Brothers, in a sequel to its "Fantastic Beasts" spin-off, decided to add some gay undertones to Albus Dumbledore's character. When China found out about the unnecessary addition of an LGBT relationship, they asked producers to cut it. Hollywood, ever the compliant partner of the communist regime, obliged.

"We want audiences everywhere in the world to see and enjoy this film," a Warner spokesperson said, "and it's important to us that Chinese audiences have the opportunity to experience it as well, even with these minor edits."

In other words, it's okay for a global abuser of human rights to demand an end to LGBT indoctrination, but not American parents? If China says sexualization is off limits, it's "responding sensitively to a variety of in-market factors." If parents do, it's a "hateful" "form of bullying" that hurts children. No wonder the grassroots are upset.

"This double standard -- Republican governors can't make reasonable and popular policy changes in this country, but the Chinese government's whims must be respected, even if they violate progressive pieties -- is untenable," National Review's Jack Butler argues. And yet, the Left is only digging in, accusing Republicans of reigniting the culture wars for political gain.

"They just kept pivoting until they could find the thing that they thought would capture the public's imagination and turn them against LGBTQ equality..." the Human Rights Campaign complained to the New York Times. "They've cared about women's sports for exactly as long as it was politically expedient."

Wait a minute, most parents would say. Republicans didn't pick this fight. They didn't send their government attack dogs after Title IX or demand taxpayer funding for children's sex changes. They didn't fire off executive orders opening our daughters' locker rooms and teams to the opposite sex. Or infiltrate classrooms with science-denying lessons on sex and gender and offer LGBT erotica in school libraries. Democrats did that. If this is a "political opening" for Republicans, as the Times argues, then it's because the majority of America agrees with them.

"At the end of the day," the Daily Wire's Mary Margaret Olohan said on "Washington Watch," "this is about children and there are many political issues that Americans will disagree over on both sides of the aisle, be it the border wall or abortion. But when it comes to your children, parents are a lot more unified, I think, in [wanting] to be able to control what your children are being taught."

And the ferocious pushback to Disney, the public schools, Hollywood, and any woke corporation telling parents to butt out of child-rearing is a prime example of that. The Left is spinning its wheels, desperate to find traction for an agenda that's wildly unpopular across almost every demographic. Right now, 68 percent of Americans are less likely to do business with Disney for trying to sexualize Florida's K-3 classes -- and that includes almost 50 percent of Democrats!

Obviously, Olohan shook her head, "This is not a message that [is resonating] with Americans." And yet, Democrats -- taken hostage by their woke fringe -- refuse to back away, sounding more desperate and tone-deaf by the minute. "If you look at what happened in Virginia," she went on, "we were in sort of the same situation during the gubernatorial election -- where a lot of people thought that Terry McAuliffe would kind of skate into the governor's seat as a Democrat. And then amidst all of this talk about education, he had to go and say that parents didn't have the right to decide what their children should be taught. Well, that pretty much won the election for Governor Youngkin. And so we're seeing this translated across the country as parents kind of speak up, finally. [It's] a parental rebellion against woke ideology."

Disney -- and Democrats in general -- need to see the handwriting on the wall and back down, or else these midterm elections will be the beginning of the wilderness years for the president's party. As more parents are starting to realize, whether it's education or entertainment, there's no middle ground on extremism.