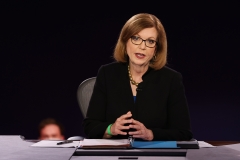 In the last few months, the Trump-Pence team has held a plethora of press conferences and "pool sprays" during which they've taken hostile liberal questions, while Joe Biden's campaign has called a "lid" on the press many days and has "lidded" Kamala Harris from the national press since she was picked in August.

So it's a little perverse that when Harris finally showed up for big-league questioning at the vice presidential debate, moderator Susan Page of USA Today gave her little-league questioning. Allow me to list the most frustrating and/or feckless Page inquiries in order:

There is no more useless softball. It's a Democratic National Committee question because it assumes Trump will lose. Trump declines to answer because it builds the media narrative that he's losing the election. They asked this in 2016, and it was useless because he won.

2. Then came the vomitous softball about the tragic shooting of Breonna Taylor. Her boyfriend shot first at the cops, saying he didn't hear them knock and say they were police. Page said: "They say they were acting in self-defense. None of them have been indicted in connection with her death. Senator Harris, in the case of Breonna Taylor, was justice done?"

Page is implying "justice" means you indict cops when no jury would convict them — because they were acting in self-defense.

3. Climate change? Again? Page asked Pence, "Do you believe, as the scientific community has concluded, that manmade climate change has made wildfires bigger, hotter and more deadly, and it made hurricanes wetter, slower and more damaging?"

Liberals always use this beat-your-wife framing: Are you with the "scientific community?" Or are you for Denial and Ignorance?

The toughest question Page gave Harris was one that noted Harris' ticket can't take a consistent position on climate.

"What exactly would be the stance of a Biden-Harris administration toward the Green New Deal?" she asked.

Page continued: "Access to abortion would then be up to the states....If Roe v. Wade is overturned, what would you want Indiana to do? Would you want your home state to ban all abortions?"

That's a fair question. But then she asked the same question to Harris, with a slight twist: "Would you want your home state to enact no restrictions on access to abortion?" Isn't that roughly where California is now?

Harris only faced tough questions from Mike Pence. For example, he pressed about her refusal to take a stand against court packing. We need more balanced moderators. We're not getting fair and equally accountable debates.