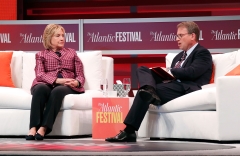 The Atlantic launched a fall-campaign fusillade with anonymous sources claiming President Donald Trump callously trashed America's war dead as "losers" and "suckers," and it is being celebrated by the pro-Biden news media. The Atlantic is "respected" and "venerable" and "at the zenith of its influence."

After the article came out, Democratic presidential nominee Joe Biden held a press briefing and called first on Edward-Isaac Dovere of The Atlantic. Dovere said "in a call convened by your campaign, Khizr Khan" — a Biden backer — "said that the comments demonstrated that President Trump's life is a testament to selfishness, and that his soul is that of a coward. You've talked about this as a different view of how you see the job as president. But when you hear these remarks — 'suckers,' 'losers,' recoiling from amputees — what does it tell you about President Trump's soul and the life he leads?"

Let's list some additional evidence that The Atlantic is a hyperpartisan outlet.

1. Laurene Powell Jobs, the multibillionaire widow of Apple founder Steve Jobs, bought a majority share in The Atlantic in 2017. In 2015, she celebrated Hillary Clinton in Time magazine as a "revolutionary" figure and "one of America's greatest modern creations." In 2016, Laurene Jobs donated $2 million to Clinton's Priorities USA super PAC via her nonprofit and hosted a $200,000-a-plate fundraiser for Clinton that raised more than $4 million.

2. In the 2020 cycle, Jobs has donated the individual maximum contribution of $2,800 to eight Democratic presidential contenders, not just Joe Biden but Michael Bennet, Cory Booker, Pete Buttigieg, Kamala Harris, Amy Klobuchar, Tom Steyer, and Andrew Yang. She has donated more than $600,000 to Biden and at least $70,800 to the Democratic Senatorial Campaign Committee.

Neither of these owners have given to Republicans.

4. The Atlantic hyperbolically endorsed Hillary Clinton in 2016, claiming it was on the right side of history and angrily denouncing Trump as "ostentatiously unqualified" and "appallingly sexist." The magazine continued: "He expresses admiration for authoritarian rulers, and evinces authoritarian tendencies himself....He is an enemy of fact-based discourse; he is ignorant of, and indifferent to, the Constitution; he appears not to read."

5. In 2016, Goldberg, after being handpicked for hours of interviews with then-President Obama to promote "The Obama Doctrine" story, gushed on NPR that Obama wasn't weak on national security. He's "the greatest terrorist hunter in the history of the American presidency....This is a guy who has killed terrorists in seven or eight different countries." But Obama's failure to enforce his "red line" on Syrian use of chemical weapons? Goldberg oozed, "this is a master politician at work, and he's kind of doing a little bit of jujitsu."

Bend Jeff — shape Jeff — any way you want him.

6. Emily Zanotti at The Daily Wire remembered when The New York Times Magazine reported Obama national security adviser Ben Rhodes created an "echo chamber" for Obama's Iran deal, and Goldberg attacked The Times writer David Samuels for having written "for those in need of more traditional-seeming forms of validation, handpicked Beltway insiders like Jeffrey Goldberg of The Atlantic...helped retail the administration's narrative."

Goldberg wrote, "I did not find this mention of my name amusing at all, because Samuels is making a serious, unsourced, and unsubstantiated allegation against me in an otherwise highly credible publication."

How does Goldberg know this is "unsourced?" Hypocrisy, anyone? He's just mad this underlined that "editorial independence" isn't his strong suit, at all.