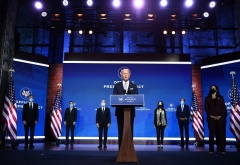 What, in today's political culture, is a "centrist"? Old-fashioned political nerds define it by support for legislation and policy proposals. If you love really big tax cuts and favor abolishing several Cabinet departments, you're not a centrist. If you want to "defund the police" and "end fossil fuels," you're also not a centrist.

This is one of those matters of political categorization that our most prestigious newspapers mangle on a regular basis. Liberal editors and reporters have an annoying tendency to define the center as the precise location where they stand on the ideological spectrum.

Case in point: The New York Times placed this fraudulent headline at the top of its front page on Sunday: "On Philosophy, Biden Cabinet Leans Centrist." This is simply preposterous.

Reporters Michael Shear and Michael Crowley display their delusion (or their attempt to confuse the public) in their lede: "His economic and environment teams are a little left of center. His foreign policy picks fall squarely in the Democratic Party's mainstream. His top White House aides are Washington veterans."

Being a "Washington veteran" does not define your ideology. Sen. Ed Markey has 44 years of service in Congress. He also has an American Conservative Union Foundation lifetime rating of 3%. Being in the "Democratic mainstream" is a very different measure than being in the bipartisan mainstream, where you might define a centrist. Someone with a lifetime ACU rating of 44%, such as Sen. Susan Collins, is a centrist.

The Times wants to have it both ways. It insists Biden's "initial wave of personnel choices is a familiar, pragmatic and largely centrist one." Two paragraphs later, it touts the choices for having "a new sense of urgency about climate change." So, in the elastic definitions of The Times, you can have the "urgency" to end fossil fuels and be "largely centrist" at the same time.

The story brings in Varshini Prakash of the radical Sunrise Movement — the organization that protested against House Speaker Nancy Pelosi and Sen. Dianne Feinstein as being some kind of horrid, petroleum-entranced centrists who are dooming the children to planetary death by failing to back the Green New Deal. Prakash praised Biden's environmental picks as a "departure from the leave-it-to-the-markets way of thinking" on climate.

You can tell the Sunrise Movement is extremist because The Times defines it as a "liberal group focused on climate change."

What this betrays is that reporters sound a lot like Democratic politicians trying to placate moderate or non-ideological voters with soothing sounds about centrism, and placate the leftist Democratic base with their warm praise for Biden's "urgency." Reporters praise Biden as "boring" in manner and "ambitious" in agenda.

Finally, the Times reporters declare, "(T)here is no one yet in Mr. Biden's cabinet carrying the torch for the policies that he campaigned against during the primaries: free college for everyone, a costly Green New Deal, an anti-Wall Street agenda, universal health care and steep increases in the minimum wage."

How can they forget the incoming vice president? Do they think she's not in the Cabinet? Kamala Harris signed on to Sen. Bernie Sanders' socialist "Medicare for All" health care Senate bill and was an early Sanders ally on raising the minimum wage to $15 an hour. She proposed the Climate Equity Act with Rep. Alexandria Ocasio-Cortez and backed Sen. Brian Schatz's Debt-Free College Act.

The New York Times isn't committing journalism with articles like this. It is engaged in political spin, trying to put a spoonful of centrist sugar on the national palate to help the socialist medicine go down.

(Tim Graham is director of media analysis at the Media Research Center and executive editor of the blog NewsBusters.org.)