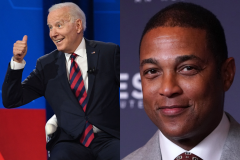 CNN staff became apoplectic whenever former President Donald Trump called them "fake news," but on Wednesday, they offered President Joe Biden a nationally televised boost that can accurately be described as a "fake town hall."

A real town hall would sell tickets in a city like Cincinnati and let the locals mix it up with the president and ask him whatever was on their minds. That's not what CNN did. It was an "invitation only" audience, which means nobody boos or laughs at inappropriate times. CNN was talking over the video, but when Biden waved goodbye at the limited crowd, they gave him a standing ovation.

The questioners were typically tilted: eight Democrats and three Republicans, plus a mother who lost a son to opioids. Questions are clearly pre-scripted. The network knows exactly what's going to be asked on what topic. CNN.com had a preview article telling viewers the night's topics in advance. Airing it live doesn't mean it's lively.

Those inquirers described as Republicans were very polite — almost objective in their questions. Several Democrat questioners let loose. A black woman complained bitterly about how Democrat plans "are held hostage by the utopian need to gain bipartisan support." A recent college graduate demanded we "get rid of the filibuster so we can protect our democracy."

Then there was "moderator" Don Lemon, who could be expected to ask eight or 18 questions like a Democrat. As usual, he was more activist than journalist. After the college kid demanded we shred the filibuster, Lemon went on a rant about how his grandmother had a fifth grade education and couldn't read but "would tell me stories about people asking her to count the number of jelly beans in the jar, or the soap in — so why is protecting the filibuster — is that more important than protecting voting rights, especially for people who fought and died for that?"

Somehow, Lemon was trying to claim that Republicans were going to insist black voters in 2022 will have to count jelly beans as a "literacy test." This is CNN, which claims to hate "gaslighting" and "misinformation."

But Biden also made false claims that Lemon didn't check. Early on, he insisted more people have died from COVID-19 "than in all our major wars combined." The Department of Veterans Affairs said there are more than 650,000 "battle deaths" before you even count 300,000 other deaths in theater. As Biden was speaking, PolitiFact tweeted, "That doesn't seem right. Our last tally of all war deaths was 1.3M."

Biden also claimed: "They aren't saying Joe Biden is anti-police. Cops are not saying that about Joe Biden. They know me. Period!" In fact, cop unions endorsed Trump in 2020, and at the Republican convention, Michael McHale, president of the National Association of Police Organizations, said, "Your choices are the most pro-law-enforcement president we have ever had or the most radical anti-police ticket in our history."

Hunter Biden came up...but not his corrupt "art" auction that's upcoming. No, Lemon gushed, "You've been very open about your son Hunter's problems with addiction." Biden replied, "I'm so damn proud of my son," and touted Hunter's book about being an addict.

CNN held the event at Mount St. Joseph University, and the local bishop insisted he would not have permitted the allegedly devout president to speak at a Catholic school. None of that came up, despite the Catholic League saying Biden has violated core Catholic teachings 32 times as president.

CNN's Biden special loudly signaled that the people who pose as saviors of democracy don't want any actual dissent to break out on their network.