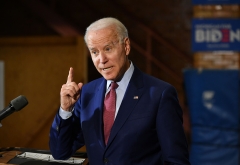 At a March 8 White House event to announce the nomination of two female generals to lead U.S. military combatant commands, President Joe Biden seemed to forget the name of Defense Secretary Lloyd Austin and where Austin works. Since the theme of the president's mental acuity is still associated with memes of former President Donald Trump, the media desperately wanted to forget this happened.

It recalls an old moment the media loved to recount, when, in 1981, President Ronald Reagan greeted his secretary of housing and urban development, Samuel Pierce (a black man, like Austin) as "Mr. Mayor" at an event with a receiving line of mayors. The New York Times liked that enough that it recalled the story in Pierce's obituary in 2000, saying, "The widely reported anecdote clearly embarrassed Mr. Pierce and dogged him for the rest of his cabinet tenure."

Compare that to Biden, who proclaimed: "And I want to thank the Sec — the former general. I keep calling him 'General' — my — the guy who runs that outfit over there. I want to make sure we thank the secretary for all he's done to try to implement what we've just talked about, and for recommending these two women for promotion."

A short Washington Post account on this by Felicia Sonmez couldn't squeeze in this embarrassing/amusing gaffe. New York Times reporters Eric Schmitt and Helene Cooper skipped over it in their story headlined "Biden Endorses Female Generals Whose Promotions Were Delayed Over Fears of Trump's Reaction." This anti-Trump angle wasn't even "news," since on Feb. 17, the same reporters offered a story headlined "Promotions for Female Generals Were Delayed Over Fears of Trump's Reaction."

Schmitt and Cooper rattled on against former President Donald Trump for 875 words but couldn't mention the Biden brain cramp. They repeated that last fall, then-Defense Secretary Mark Esper and Gen. Mark Milley, then chairman of the Joint Chiefs of Staff, delayed these nominations because they "feared that if they even broached the women's names, Mr. Trump and some of his top aides would replace them with their own candidates before leaving office."

They even worked in the star witness from the first impeachment of Trump, Lt. Col. Alexander S. Vindman, saying, "Vindman, who left the military last summer after his own entanglement with the White House, argued in the national security blog Lawfare that Mr. Esper and General Milley should have fought it out with Mr. Trump."

The media would probably employ the excuse that Biden mentioned Austin by name earlier at the event, when he appeared to be reading from a teleprompter. CNN's afternoon program "The Lead with Jake Tapper" ran the entire event live, including the gaffe at the end. But when it was over, substitute host Pamela Brown turned to White House reporter Kaitlan Collins, and they went back to the topic of Trump's reported sexism.

The MSNBC program "Deadline: White House" ran several minutes of Biden's prepared remarks but ducked out before the gaffe. Later that night, host Brian Williams ran a clip of Vice President Kamala Harris from the event and then introduced a clip of former Sen. Claire McCaskill, saying, "Today that was simply too much for a former senator who knows both of these generals and regards it as a crime and a tragedy that their promotions had to be kept away from President Trump."

ABC's "World News Tonight With David Muir" offered a 61-word story read by Muir in which he touted Biden's action on International Women's Day and recounted, "young women beginning their military career should know, quote, 'no door will be closed to them.'"

Is it any wonder that half of America thinks the press is in the tank for Biden?