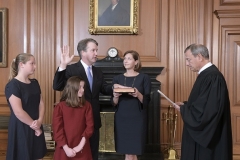 The case of Dobbs v. Jackson Women's Health, which the Supreme Court will hear this year, could give them an opportunity to redeem themselves.

At issue in this case is a Mississippi law that bans most abortions after a baby's 15th gestational week. The question: Can a state prohibit doctors from killing unborn babies who are not yet old enough to survive outside the womb?

In the 2016 case of Whole Woman's Health v. Hellerstedt, Chief Justice John Roberts joined the minority of justices who opposed the court's decision to knock down less consequential abortion regulations that Texas had enacted. These regulations said that doctors performing abortions must "have active admitting privileges at a hospital" within 30 miles of the facility where they terminated babies and that any such facility must meet the state's "minimum standards ... for ambulatory surgical centers."

In his majority opinion in Whole Woman's Health, Breyer argued that the Texas regulations violated the "undue burden" test the Supreme Court had laid down in Planned Parenthood v. Casey. "An undue burden exists, and therefore a provision of law is invalid, if its purpose or effect is to place a substantial obstacle in the path of a woman seeking an abortion before the fetus attains viability," the court had said in that 1992 opinion co-authored by Justices Sandra Day O'Connor, Anthony Kennedy and David Souter.

In the 2016 case, Breyer, citing Planned Parenthood v. Casey, said of the two Texas abortion regulations: "Each places a substantial obstacle in the path of women seeking a previability abortion, each constitutes an undue burden on abortion access ... and each violates the Federal Constitution."

In 2020, the court took up the case of June Medical Services v. Russo. It challenged a Louisiana abortion law that — mirroring the Texas law the court had knocked down in 2016 — required abortionists to have admitting privileges at a hospital within 30 miles of where they performed abortions.

President Donald Trump had filled the vacancy created by the death of Justice Antonin Scalia with Neil Gorsuch. When Justice Anthony Kennedy retired, Trump had replaced him with his former clerk, Brett Kavanaugh.

Were there now enough votes to let the Louisiana law stand?

No. Why? Because, as this column has noted before, Roberts switched sides.

The court ruled 5 to 4 against the Louisiana regulation — as Roberts concurred with Ginsburg, Breyer, Sotomayor and Kagan in opposing it.

Roberts explained that in the four short years between 2016 and 2020, he had flipped on the issue because of his dedication to upholding Supreme Court precedents — even when he believed they were wrong.

"I joined the dissent in Whole Woman's Health and continue to believe that the case was wrongly decided," Roberts wrote in a concurring opinion in June Medical Services. "The question today however is not whether Whole Woman's Health was right or wrong, but whether to adhere to it in deciding the present case."

"The legal doctrine of stare decisis requires us, absent special circumstances, to treat like cases alike," said Roberts. "The Louisiana law imposes a burden on access to abortion just as severe as that imposed by the Texas law, for the same reasons. Therefore Louisiana's law cannot stand under our precedents."

Before Trump nominated Kavanaugh to the Supreme Court, Kavanaugh had served on the U.S. Court of Appeals for the District of Columbia when it heard the case of Garza v. Hargan. Here the question was whether a pregnant teenage alien caught trying to illegally enter this country has a right to an abortion in the United States.

Judge Karen Henderson, as this column had noted before, was critical of the Trump administration's approach to this untested proposition.

"Does an alien minor who attempts to enter the United States eight weeks pregnant — and who is immediately apprehended and then in custody for 36 days between arriving and filing a federal suit — have a constitutional right to an elective abortion?" wrote Henderson. "The government has inexplicably and wrongheadedly failed to take a position on that antecedent question. I say wrongheadedly because at least to me the answer is plainly — and easily — no."

Kavanaugh, however, was more understanding.

Now Mississippi has said you cannot kill an unborn child after 15 weeks of gestation. Will Roberts and Kavanaugh say they have to stand by the wrongly decided Roe v. Wade and Planned Parenthood v. Casey — because they are precedents?

Or will they stand on principal — and the Constitution itself — and let Mississippi and other states protect the right to life of the innocent unborn?