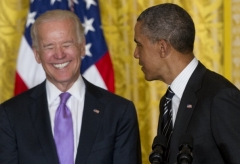 Some Americans were hopeful in 2016 that Hillary Clinton would become our first female president. She did not.

But now Joe Biden may do it.

Excuse me, you might ask, isn't Biden a man?

Well, he is for now — under the Biden gender rules. But he need not be next year.

"Transgender equality is the civil rights issue of our time," Biden tweeted on Jan. 25.

On his campaign website, he has put in writing what he means by transgender equality. This includes how the government will determine what a person's "sex" is.

"Biden believes every transgender or non-binary person should have the option of changing their gender marker to 'M,' 'F,' or 'X' on government identifications, passports, and other documentation," says the website.

"He will support state and federal efforts to allow for this accurate representation," it says.

Biden goes on to make clear that he will insist that biological males are allowed to play on the girls' basketball teams and shower in the girls' locker rooms.

"On his first day in office," says his website, "Biden will reinstate the Obama-Biden guidance revoked by the Trump-Pence Administration, which will restore transgender students' access to sports, bathrooms, and locker rooms in accordance with their gender identity."

Who are the "non-binary" persons Biden mentions? The United Kingdom-based LGBT Foundation offers a definition.

"Non-binary," it says, "can be defined as: identifying as either having a gender which is in-between or beyond the two categories 'man' and 'woman,' as fluctuating between 'man' and 'woman,' or as having no gender, either permanently or some of the time."

So, presumably, under Biden's sex identification policy that holds that "every transgender or non-binary person should have the option of changing their gender marker to 'M,' 'F,' or 'X' on government identifications," a biological male who identifies as a woman one year can get government documentation — including a passport — that indicates he is a woman.

The next year, when he identifies as a man again, he can change his documentation to say he is a man.

Six months after that, when he decides he is neither a man nor a woman, he can get government documentation that says he is "X."

If he has only a singular transgender transformation — and is not a non-binary person — all he or she needs to do is change the indication of his or her sex on his or her government documentation once.

My anticipation is that Biden — if he is elected president — will not announce next January, at the time of his inauguration, that he now identifies as a woman.

I believe he is permanently male. I do not suspect he will want to identify as a female sometime in the future.

But, in Biden's publicly stated view, not only does he have a right to do that, but if he does do that, the government would need to formally recognize he is a woman by issuing him documents that accord with his claim.

So, could Biden become the first female president?

Under Biden's own understanding of gender and his own proposed policy, it is entirely up to him what gender he identifies as after the election.

But if he declares that he identifies as a woman, the government, under Biden's policies, would accept that and begin documenting him as a woman.

Would the liberal media accept this? Would they use female pronouns when writing about Biden?

Would the Democratic leadership on Capitol Hill accept it? Would they call him Madame President? Would they proudly declare that their party had elected the first female president?

Would any of them be so bold as to declare that Biden was not a woman but a man?

Last year, the Democrat-controlled House passed the Equality Act. The official summary of this act, which has not passed the Senate, says: "This bill prohibits discrimination based on sex, sexual orientation, and gender identity in a wide variety of areas including public accommodations and facilities, education, federal funding, employment, housing, credit, and the jury system."

The text of the bill specifically states: "(with respect to gender identity) an individual shall not be denied access to a shared facility, including a restroom, a locker room, and a dressing room, that is in accordance with the individual's gender identity."

When the Judiciary Committee was considering this bill, Rep. Greg Steube of Florida offered an amendment to clarify that "nothing in the Act or any amendment made by it may be construed to require a biological female to face competition from a biological male in any sporting event."

The committee defeated this amendment.

"Biden," says his website, "will make enactment of the Equality Act during his first 100 days as President a top legislative priority."

This week, a Supreme Court opinion written by Justice Neil Gorsuch and joined by Chief Justice John Roberts — both Republican appointees — ruled that the language in the 1964 Civil Right Act banning employment discrimination because of "sex" must be interpreted to include transgenderism.

This just goes to show that Gorsuch and Roberts share Biden's view of what makes a man a woman.

The entire argument here might have been considered a reductio ad absurdum had the original proposition — that a man can become a woman or vice versa — not been absurd in the first place.