When Kennedy and Nixon Nominees Agreed 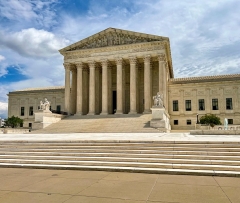 Justice Byron White, who wrote some of the most important conservative Supreme Court opinions in the latter half of the 20th century, was not nominated by a Republican president but by President John F. Kennedy.

"His character, experience and intellectual force qualify him superbly for service on the nation's highest tribunal," Kennedy said in announcing White's nomination.

"He has excelled in everything he has attempted—in his academic life, in his military service, in his career before the bar and in the Federal government — and I know that he will excel on the highest court in the land," said Kennedy.

In 1973, White joined Justice William Rehnquist as one of two dissenters from the court's erroneous opinion in Roe v. Wade, which declared abortion a constitutional right.

Then in 1986, he wrote the court's 5-4 opinion in Bowers v. Hardwick — ruling that the Constitution did not guarantee a right to same-sex sodomy.

"Proscriptions against that conduct have ancient roots," said White.

"Sodomy was a criminal offense at common law and was forbidden by the laws of the original 13 states when they ratified the Bill of Rights," he continued. "In 1868, when the Fourteenth Amendment was ratified, all but 5 of the 37 states in the Union had criminal sodomy laws. In fact, until 1961, all 50 states outlawed sodomy, and today, 24 states and the District of Columbia continue to provide criminal penalties for sodomy performed in private and between consenting adults.

"Against this background," wrote White, "to claim that a right to engage in such conduct is 'deeply rooted in this Nation's history and tradition' or 'implicit in the concept of ordered liberty' is, at best, facetious."

Chief Justice Warren Burger, who had been nominated by President Richard Nixon, concurred in White's opinion.

"Decisions of individuals relating to homosexual conduct have been subject to state intervention throughout the history of Western civilization," said Burger. "Condemnation of these practices is firmly rooted in Judeao-Christian moral and ethical standards."

"To hold that the act of homosexual sodomy is somehow protected as a fundamental right would be to cast aside millennia of moral teaching," said the chief justice.

But just 17 years later, the Supreme Court took up the case of Lawrence v. Texas — and reversed White's opinion in Bowers v. Hardwick, ruling 6-3 that there is a right to same-sex sodomy.

Justice Antonin Scalia warned in his dissenting opinion that the court was opening the door to declaring same-sex marriage a right.

"At the end of its opinion — after having laid waste to the foundations of our rational-basis jurisprudence — the court says that the present case 'does not involve whether the government must give formal recognition to any relationship that homosexual persons seek to enter,'" wrote Scalia.

"Today's opinion," he concluded, "dismantles the structure of the constitutional law that has permitted a distinction to be made between heterosexual and homosexual unions, insofar as formal recognition of marriage is concerned."

In 2015, the court ruled 5-4 in Obergefell v. Hodges that the 14th Amendment did protect a "right" to same-sex marriage.

"Suppose we rule in your favor in this case and then after that, a group consisting of two men and two women apply for a marriage license," Alito said to one of the lawyers arguing for a right to same-sex marriage. "Would there be any ground for denying them a license?"

"And let's say they are all consenting adults, highly educated," said Alito. "They're all lawyers."

This month, Senate Minority Leader Chuck Schumer introduced the Respect for Marriage Act on the Senate floor. It would effectively require nationwide recognition of same-sex marriages even if the Supreme Court were to overturn Obergefell.

Yet apparently even the authors of this bill were concerned that it might help pave the way for expanding the institution of marriage beyond even same-sex unions.

They titled one of its sections: "No Federal Recognition of Polygamous Marriages."

"Nothing in this Act, or any amendment made by this Act," it said, "shall be construed to require or authorize Federal recognition of marriages between more than 2 individuals."