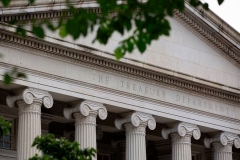 The US Treasury Department building in Washington. (Photo by ALASTAIR PIKE/AFP via Getty Images)

Back in fiscal 2019, which ended last September before COVID-19 hit, the federal government set two records.

It collected more money in individual income taxes than in any previous year — and then spent more.

Did the Americans who paid that record sum in income taxes get their money's worth?

Or were they ripped off?

Let's start with the basic fiscal facts. In fiscal 2019, the federal government collected $1,717,857,000,000 in individual income taxes, according to the Monthly Treasury Statement for September 2019.

But that $3.46 trillion in taxes was not enough for the federal government.

Before fiscal 2019, the most the government had ever spent in a fiscal year was in 2009. That was the year Congress enacted the Troubled Asset Relief Program to bail out banks and President Barack Obama's stimulus, theoretically aimed at propelling America out of the recession that ended that June.

So, what are Americans getting for the dollars the federal government extracts from their income?

In February, the Congressional Research Service updated a report about what it politely calls "federal spending on benefits and services for people with low income."

A section of the report provides "caveats" about how one should understand these "benefits and services."

"Programs included here are not social insurance," it says. "That term refers to programs intended to insure Americans against the loss of wages and work-related benefits due to retirement, disability, or temporary unemployment (e.g. Social Security, Medicare, Unemployment Insurance). Social insurance benefits are generally entitlements earned through work."

The CRS report also warns against considering the programs it counts as "welfare."

"Programs in this report cannot be collectively characterized as welfare," it says. "Welfare is typically thought of as government assistance to help poor people pay for necessities. As defined in this report, low-income programs are much broader, and include in-kind benefits and activities such as education, social services, and community development, among others."

"Four programs accounted for 68% of low-income spending in FY2018 and ten programs made up 82%," the report said. "Medicaid alone represented 48% of the total.

"In addition to Medicaid," the report said, "the top four include the Supplemental Nutrition Assistance Program (SNAP), the refundable portion of the Earned Income Tax Credit (EITC), and Supplemental Security Income (SSI)."

After expending every dollar of remaining individual income tax revenue, the government would still need to find another $159,645,000,000 to fully fund the nation's defense.

Thus, after funding the "benefits and services for people with low income" that were counted in the Congressional Research Service report and the net interest on the debt and a portion of the Defense Department and Military Programs, there would be no revenue left from individual income tax collections to pay for such things as a Department of Justice or a Department of State.

Or a White House, House or Senate.

They would need to be funded from other sources of federal tax revenue — or with more debt.