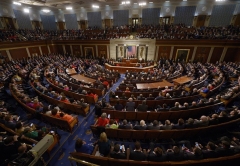 Leaders of both parties have shown they're happy to borrow and spend. ( Photo by SAUL LOEB/AFP via Getty Images)

The leaders of both the Republican Party and the Democratic Party in the U.S. Senate proved again this week that they favor a bigger federal government that spends and borrows more money.

Their timing was symbolically perfect.

On Friday afternoon, the government released the Monthly Treasury Statement for September, the last month of fiscal 2019.

It revealed that during the last fiscal year, the federal government collected an all-time record of approximately $1,717,857,000,000 in individual income taxes.

The gap between the federal government's record spending in fiscal 2019 and its third-highest total tax revenues resulted in a deficit of $984,388,000,000.

Republican Sen. Rand Paul of Kentucky offered a succinct amendment to this bill. The Congressional Record summarized it as follows: "To reduce the amounts appropriated to be 2 percent less than the amount appropriated for fiscal year 2019."

"In my office, I have a debt clock," Paul said on the Senate floor when he explained his proposal. "It is spinning out of control. The numbers are mind-boggling."

"What I have offered is a commonsense approach to this," he said. "Everybody has their sacred cow. Everybody has some money they want to spend somewhere. Why don't we cut every program by 2 pennies?"

The amendment lost 24 to 67 — with nine senators not voting.

Congress is continuing what is now a bipartisan tradition.

In the first two decades of the 21st century, real federal spending has increased by 70.7%.

In the intervening years, the Republicans and Democrats have traded control of the White House and both houses of Congress. But neither party has shown a serious interest in controlling federal spending or federal debt.

Should Senate Republicans exempt the Department of Education from a 2% cut?

Should the Republican Senate exempt the Department of Agriculture from a 2-percent cut?

Should the Republican Senate exempt the Department of Commerce from a 2% cut?

When Republicans and Democrats work together in Washington, D.C., today, it is not to cut a bloated federal government but to cut the chances this nation will be solvent and prosperous for our children and grandchildren.

Trending on CNSNews
Levin Unveils Video of John Bolton Describing Trump’s Conversations With President of Ukraine | CNSN
Sekulow Slams Schiff: Secrecy Ok for Whistleblower, But Not for Trump-Bolton Conversations? | CNSNew
Pelosi: Trump ‘Will Not Be Acquitted’ Because 'You Don't Have a Trial If You Don't Have Witnesses' |
Devin Nunes: ‘The Clip the Dem/Socialists Don’t Want You to See’ – Spread It ‘Far and Wide’ | CNSNew