The United States men’s national soccer team beats Iran 1-0 in Tuesday’s World Cup game in Qatar. The U.S. advances to the next round of the competition. Iran has been eliminated.
Commentary

U.S. Has Run Up $5.5 Trillion in Trade Deficits With China 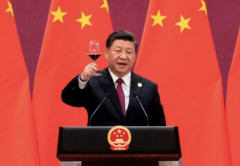 Since 1985, the first year for which the Census Bureau has posted this nation's bilateral merchandise trade deficits on its website, the United States has accumulated $5.5 trillion in trade deficits with China.

No other nation comes close.

By far, however, the least balanced relationship—both last year and in recent decades—has been with China.

Among the seven nations that were our leading trading partners as of 2019, the second-largest cumulative deficit over that 35-year period was the $2,240,119,400,000 deficit the United States ran with Japan.

In fact, in 16 of the 35 years on record, the United States actually ran a merchandise trade surplus with the United Kingdom.

But China is an outlier.

The result: The United States ran a $345.6 billion merchandise trade deficit with China.

America's next-largest merchandise trade deficit last year was with our top trading partner, Mexico. But that deficit was only $101.8 billion — less than one-third the $345.6 billion deficit with China.

Despite having much smaller economies and populations than China, both Mexico and Canada managed to buy far more American-made goods than China did.

It is a fact, then, that even though China has both a GDP and a population that is about 10 times larger than Mexico's, Mexico, in 2019, purchased almost 2.5 times the American-made goods when measured in dollar value ($256.4 billion) as China did ($106.6 billion).

Similarly, even though China has a GDP that is about 14 times larger than Canada's and a population that is about 37 times larger, Canada purchased about 2.7 times the American-made goods ($292.7 billion) that China did in 2019 ($106.6 billion).

Can geographical proximity explain all of that disparity?

The United States normalized relations with China in 1979 but did not grant China permanent normal trade relations until more than 20 years later.

"On October 10, 2000, Clinton signed into law P.L. 106-286, granting China permanent normal trade relations and paving the way for China to join the WTO, which it did in December 2001," says the Congressional Research Service.

What has been the trajectory of U.S. economic relations with China?

In 1985, the first year reported by the Census Bureau, the U.S. merchandise trade deficit with China was $6 million. In 2001, when China joined the WTO, it was $83 billion.

What is the United States buying from China?

The State Department's 2019 report on human rights in China begins with these words: "The People's Republic of China (PRC) is an authoritarian state in which the Chinese Communist Party (CCP) is the paramount authority. CCP members hold almost all top government and security apparatus positions."

But this authoritarian state run by the Communist Party provided the labor to produce tens of billions of dollars in cell phones and computers that were sold last year in the United States of America.

America ought to deliver a very simple message to the authoritarians in Beijing: As long as you are not a free country, you will not be able to freely sell your products here.