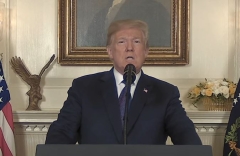 Late on a Friday afternoon five years ago, Donald Trump put out a tweet that made sense.

"The president must get congressional approval before attacking Syria — big mistake if he does not!" Trump said.

The reason President Barack Obama would have needed congressional approval to attack Syria — although Trump did not expressly make this point in his tweet — is because the Constitution requires it.

Can a president initiate military action — other than to repel a sudden attack on the United States — without securing prior authorization from Congress?

The answer is unambiguous: No.

On Friday, Aug. 17, 1787, the delegates at the Constitutional Convention discussed a clause that would have given Congress the power "to make war."

As James Madison recorded in his notes on that day, only one delegate — Pierce Butler of South Carolina — suggested giving the Executive the power to make war.

"He was for vesting the power in the President, who will have all the requisite qualities, and will not make war but when the Nation will support it," Madison wrote, paraphrasing Butler's argument.

After Butler made this point — which other delegates would reject — Madison and Elbridge Gerry of Massachusetts offered an amendment. They "moved to insert 'declare,' striking out 'make' war; leaving to the Executive the power to repel sudden attacks."

"Mr. Gerry," said Madison's notes, "never expected to hear in a republic a motion to empower the Executive alone to declare war."

George Mason of Virginia, Madison noted, "was agst giving the power of war to the Executive, because not (safely) to be trusted with it; or the Senate, because not so constructed as to be entitled to it. He was for clogging rather than facilitating war; but for facilitating peace. He preferred 'declare' to 'make.'"

The convention approved Madison's and Gerry's amendment. The Constitution gave Congress — not the Executive — the power: "To declare War, grant Letters of Marque and Reprisal, and make Rules concerning Captures on Land and Water."

It also gave Congress the powers to "define and punish piracies and felonies committed on the high seas, and offenses against the laws of nations," to "raise and support armies," to "provide and maintain a navy," to "make rules for the government and regulation of the land and naval forces," to "provide for calling forth the militia to execute the laws of the union, suppress insurrections and repel invasions," and to "provide for organizing, arming and disciplining the militia."

In his book "Presidential War Power," constitutional scholar Louis Fisher examined how the framers crafted the war power and how presidential administrations acted on it.

"The constitutional framework adopted by the framers is clear in its basic principles," Fisher wrote. "The authority to initiate war lay with Congress. The president could act unilaterally only in one area: to repel sudden attacks."

"The Constitution vests the power of declaring war with Congress," President George Washington said in a 1793 letter cited by Fisher, "therefore, no offensive expedition of importance can be undertaken until after they have deliberated upon the subject, and authorized such a measure."

The framers did not believe that giving Congress the power to "declare war" meant Congress must either authorize an unlimited conflict or no conflict at all. This was affirmed in the unanimous 1800 Supreme Court decision in Bas v. Tingy.

At issue in Bas was a law enacted by Congress that allowed American vessels to engage the French navy and recapture, as prizes, U.S. merchant ships that had been seized by France.

Justice William Paterson, a Washington appointee who had served as a delegate to the Constitutional Convention, wrote a telling opinion. "The United States and the French Republic are in a qualified state of hostility," Paterson wrote. "An imperfect war, or a war, as to certain objects, and to a certain extent, exists between the two nations; and this modified warfare is authorized by the constitutional authority of our country.

"As far as Congress tolerated and authorized the war on our part," he wrote, "so far may we proceed in hostile operations."

"Congress is empowered to declare a general war, or Congress may wage a limited war; limited in place, in objects and in time," Chase wrote.

"Congress has not declared war in general terms; but Congress has authorized hostilities on the high seas by certain persons in certain cases," he said.

"So far it is, unquestionably, a partial war, but, nevertheless, it is a public war, on account of the public authority from which it emanates."

President Trump did not seek and did not get that authority from Congress before he launched a "limited war" on Syria. To quote him, he made a "big mistake."