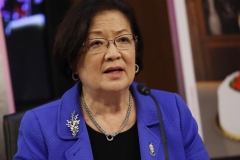 When Democratic Sen. Amy Klobuchar of Minnesota began her 30-minute turn at questioning Supreme Court nominee Amy Coney Barrett in the Senate Judiciary Committee on Tuesday afternoon, Democratic Sen. Mazie Hirono of Hawaii was not in the room.

Hirono apparently was not that interested in what she anticipated Klobuchar would have to say.

Or perhaps she preferred to watch it on C-SPAN — just as Americans 3,000 miles away could.

Hirono was not alone. When Klobuchar's 30 minutes started, only three other Democratic senators were there: Ranking Member Dianne Feinstein of California, Dick Durbin of Illinois, and Chris Coons of Delaware.

Hirono's lack of interest in personally witnessing what Klobuchar had to say was apparently reciprocated.

When Hirono later began her own 30-minute turn at questioning Barrett, Klobuchar was not there.

Like Klobuchar, Hirono also did not inspire other senators to stay and watch her in-person — as was manifest to those there, including this writer.

When it was Hirono's time to speak, she soon became the loneliest senator on the Judiciary Committee.

Of the nine Democratic senators on that panel in addition to Hirono, two — Patrick Leahy of Vermont and Kamala Harris of California — had not physically shown up for the hearing at all. When it was their turn to speak, they did so virtually.

Thus, they were not there when Hirono had her 30 minutes.

Of Hirono's seven remaining Democratic committee colleagues, only four were in the room when she started speaking. They were Ranking Member Diane Feinstein of California, Dick Durbin of Illinois, Chris Coons of Delaware and Richard Blumenthal of Connecticut.

Feinstein, Durbin and Coons formed what might be called the Polite and Dutiful Caucus among the committee's Democrats. They tended to stay in their seats for most of the hearing while their colleagues — both Republican and Democrat — questioned Barrett and she gave her answers.

Sen. Cory Booker — like Klobuchar — was absent when Hirono had her turn with the microphone. But, unlike Klobuchar, Booker avoided the hearing in its entirety until the early evening when it was finally his time to speak.

Like Blumenthal, Whitehouse was not a member of the Polite and Dutiful Caucus who sat through most of the hearing, but he did at least sometimes sit in the room as the hearing proceeded.

Yet, Whitehouse was not there when Hirono began to speak.

Blumenthal not only was there when Hirono began speaking but also occupied the seat immediately next to hers — observing, of course, the correct social distancing.

But, at 4:47 p.m., while Hirono was in the midst of her 30-minute questioning of Barrett, Blumenthal gathered up his notes, grabbed his cardboard coffee cup and made his way out of the room — walking behind Hirono as she spoke.

In the meantime, Coons had also escaped from the room.

That left Feinstein and Durbin the only Democrats left there to personally hear what Hirono had to say.

Then, something inspired Durbin to also briefly leave. At 5:04 p.m., as Hirono continued her 30-minute session, Durbin was not there.

Feinstein was then the only Democrat left in the committee room to personally witness Hirono's questioning of Barrett.

Now, once again, there were two Democratic senators — in addition to Hirono — attending the confirmation hearing of a Supreme Court justice.

What did Hirono's Democratic colleagues miss when they left the room as she interrogated Barrett? What were the significant legal and constitutional issues Hirono sought to address while questioning this devout Catholic mother of seven children — some of whom were sitting behind her in the hearing room?

"Since you became a legal adult, have you ever made unwanted requests for sexual favors or committed any verbal or physical harassment or assault of a sexual nature?" Hirono asked.

"Have you ever faced discipline or entered into a settlement related to this kind of conduct?" Hirono asked.

Hirono spent much of the remainder of her time incoherently ranting at Barrett about why she suspects Barrett may work on the Supreme Court to overturn Roe v. Wade and roll back Obergefell v. Hodges.

Here, at least, Hirono was candid.

They knew long before this confirmation hearing started what the central question is regarding modern-day Supreme Court nominees: Will this person use the power of the nation's highest court to advance a moral and social vision that favors a "right" to kill unborn babies and for men to marry men?

Hirono and other Democrats clearly fear Barrett will not.

Terence P. Jeffrey is the editor in chief of CNSnews.com.