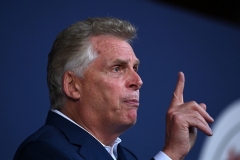 At that time, McAuliffe had just recently become chairman of Sen. Hillary Clinton's 2008 presidential campaign. He would later go on to serve as governor of Virginia from 2014 to 2018, and is now seeking that office again.

Back in January 2007, McAuliffe had also published an autobiography, "What a Party! My Life Among Democrats: Presidents, Candidates, Donors, Activists, Alligators and Other Wild Animals," in which he discussed, among other things, his education in Catholic schools. In his interview that year with Hewitt, he talked about this book and his experience in those schools.

"Now did you do eight years or twelve years of Catholic education?" Hewitt asked him.

His family was not forced to enroll him in government schools — and, obviously, they chose not to do so.

"Can you name your K-8 teachers?" Hewitt asked him in that 2007 radio interview.

In this same 2007 interview, Hewitt challenged McAuliffe on the conflict between the church's position on killing an unborn child and his own.

"You often cite Catholic doctrine in this book, and yet you support late-term abortions, and judges who impose them on people. How... did you miss those classes?" Hewitt asked.

"I say that I'm Catholic, sure," conceded McAuliffe. "Irish Catholic."

"I wish I could follow 100% the teachings of the Catholic Church, but believe it or not, much to your chagrin, I am not Jesus Christ," McAuliffe said a moment later.

"No, but I mean, the whole abortion controversy... you compartmentalize that and put that aside?" Hewitt asked.

"I can, as can many Catholics," said McAuliffe.

About a month after this 2007 radio interview, McAuliffe was scheduled to give a presentation about his autobiography at his alma mater, Bishop Ludden. But two days before that event, the Syracuse diocese cancelled it.

"Father Cliff Auth, diocesan chancellor, said the reversal was a direct result of comments Mr. McAuliffe made in a Jan. 29 interview with radio talk-show host Hugh Hewitt," explained an article in Catholic Review, the news site for the Archdiocese of Baltimore.

"The public statement by Mr. McAuliffe in an interview with Mr. Hugh Hewitt in which he stated that he was 'pro-choice — no question about it' was in clear violation of the diocesan policy articulated on Nov. 20, 2003," said Auth, according to the Catholic Review.

That policy said: "Any person who publicly supports abortion, or who holds that abortion is right or a matter of choice, may not be invited to speak at diocesan functions or in diocesan/parish facilities — except at an academic symposium where both sides of the issue can be fairly presented."

In a Sept. 28 Virginia gubernatorial debate with Republican candidate Glenn Youngkin, McAuliffe defended vetoing bills when he formerly served as governor that were designed to inform parents when their children were going to be exposed to sexually explicit materials in a public school.

"I'm not going to let parents come into schools and actually take books out and make their own decision," McAuliffe explained in last month's gubernatorial debate.

"So, yeah, I stopped the bill," he said. "But I don't think parents should be telling schools what they should teach."

When McAuliffe was Virginia's governor in 2016, he vetoed a bill that would have allowed the parents of a disabled child to use funds that would ordinarily have been used to fund that child's education in a public school to instead send that child to a private school.