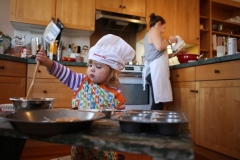 A toddler gets helps mom bake. (Photo by Tim Clayton/Corbis via Getty Images)

Who should care for and nurture a 3-year-old child? A mother, a father — or the government?

The Democratic Party and former Vice President Joe Biden have taken an unambiguous stand on this. Caring for 3-year-old children, in their view, is the government's job.

"We are committed to creating a society where children are safe and can thrive physically, emotionally, educationally, and spiritually," says the platform that the Democratic Party approved at its national convention last month.

This, of course, does not mean a doctor cannot kill a child before birth.

The same Democratic platform that dedicates the party to "creating a society where children are safe" also says: "Like the majority of Americans, Democrats believe every woman should be able to access high-quality reproductive health care services, including safe and legal abortion."

Nor does it mean, in the Democrats' view, that a child cannot be adopted at birth by a homosexual couple or a person who is biologically one sex but claims to be another.

"We will work to ensure LGBTQ+ people are not discriminated against when seeking to adopt or foster children," says the Democratic platform.

The Democratic platform also says the party will guarantee that government documents identify a person by whatever sex they claim to be, not the sex they actually are. "We will ensure," it says, "that all transgender and non-binary people can procure official government identification documents that accurately reflect their gender identity."

But the Democratic Party's ultimate commitment to dealing with 3-year olds is spelled out in its education policy.

"We recognize that learning starts at birth," says the Democratic platform.

"Despite ample research showing that early childhood education can improve outcomes for students for decades to come, we still do not have universal, high-quality pre-K," it says.

"Democrats believe that all children across the United States should have access to high-quality early childhood education programs," it says. "We will work with states to offer pre-K for all three- and four-year-olds and expand Head Start and Early Head Start."

On Biden's campaign website, it says he will: "provide all 3- and 4-year-olds access to free, high-quality pre-kindergarten, laying a strong foundation for children and saving parents thousands of dollars a year on child care costs."

"As President," says his website, "Biden will work with states to offer pre-K for all three- and four-year-olds. This investment will ease the burden on our families, help close the achievement gap, promote the labor participation of parents who want to work, and lift our critical early childhood education workforce out of poverty."

In his acceptance speech at the Democratic National Convention, Biden declared that he is in "a battle for the soul of this nation."

The vision that he and his allies have for America is based on a fundamentally different value system than the one on which this nation was founded.

He believes there is a right to kill an unborn child and that the government has the power to force individuals and institutions to accept the notion that a biological male can become a female.

America was founded on the laws of Nature and Nature's God. They recognize that all men are endowed by their Creator with a right to life.

And it is difficult to imagine a greater flouting of the natural law than for a male to claim to be female.

Or for a political party to vow that it will allow someone who makes such a claim to adopt and foster children.

In Biden's and the Democratic Party's "battle for the soul of this nation," which value system would they install in the government-sponsored universal preschool system they envision absorbing all American 3-year olds?

One of the worst things that could happen to America in the coming decades would be for this nation's children to be indoctrinated into the false value system of those who promote abortion and transgenderism.