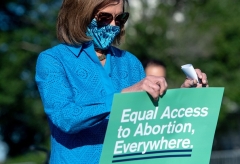 Speaker of the House Nancy Pelosi (D-Calif.) urges passage of the "Women's Health Protection Act," on September 24, 2021, outside the US Capitol. (Photo by SAUL LOEB/AFP via Getty Images)

Speaker Nancy Pelosi went to the House floor Sept. 24, 2021, to express her support for a bill that would enshrine a "right" to abortion in federal law.

"For years, radical restrictions on women's reproductive health freedoms have been pushed across the nation, with 2021 on track to be the worst legislative year for women's health rights," Pelosi said.

"I come to this as a Catholic and a mother of five, in 6 years and 1 week, and the joy that all that meant to us," she explained.

Under Pelosi's leadership, the House then voted 218 to 211 to pass the Women's Health Protection Act. It would trump state laws restricting abortion — even if Roe v. Wade were overturned.

"This bill prohibits governmental restrictions on the provision of, and access to, abortion services," says its official summary.

The text of the bill itself refers to "a person's constitutional right to terminate a pregnancy."

No House Republican voted for it. Only one House Democrat voted against it.

It was then blocked in the Senate, when only 46 members (of the 60 needed) voted to end debate on the bill and bring it up for a vote.

Pelosi, however, has not given up on it.

On March 22, almost four months after the Supreme Court heard the oral arguments over a Mississippi law that bans abortions after 15 weeks of pregnancy, Pelosi did an on-stage interview at the Lyndon B. Johnson Presidential Library. Mark Updegrove, president of the LBJ Foundation, was the moderator.

"What is the future of Roe v. Wade, and what does more restrictive abortion mean to the future of our country?" Updegrove asked Pelosi, according to a video of the exchange posted on YouTube by the speaker's office.

Pelosi then said: "I am a devout Catholic ... Mother of five children in six years and one week."

"This is a precedent of the court," she said. "It should be upheld by the court."

"This really gets me burned up, in case you didn't notice," she went on to say, "because, again, I'm very Catholic, devout, practicing, all of that. They would like to throw me out, but I am not going — because I don't want to make their day. But this is fundamental to respect. Respect for women, and their judgement about their lives, the timing and size of the family."

"We have to make this fight. This is fundamental," she said.

What is the fundamental point the Catholic Church makes about abortion?

He rejected the use of euphemisms in describing the killing of an unborn child.

"Especially in the case of abortion there is widespread use of ambiguous terminology, such as 'interruption of pregnancy,' which tends to hide abortion's true nature and to attenuate its seriousness in public opinion," he wrote. "Perhaps this linguistic phenomenon is itself a symptom of uneasiness of conscience.

"But," he continued, "no word has the power to change the reality of things: procured abortion is the deliberate and direct killing, by whatever means it is carried out, of a human being in the initial phase of his or her existence, extending from conception to birth."

"The moral gravity of procured abortion is apparent in all its truth if we recognize that we are dealing with murder and, in particular, when we consider the specific elements involved," he wrote. "The one eliminated is a human being at the very beginning of life. No one more absolutely innocent could be imagined. In no way could this human being ever be considered an aggressor, much less an unjust aggressor!"

Politico this week published the leaked draft of the Supreme Court's opinion in the Dobbs v. Jackson Women's Health case, which was written by Justice Samuel Alito.

If this draft becomes the final opinion actually delivered by the court, Roe v. Wade and Planned Parenthood v. Casey will be overturned, and the states will reclaim the authority to restrict and prohibit abortion.

"We hold that Roe and Casey must be overruled," says the draft.

"Roe was egregiously wrong from the start," it says. "Its reasoning was exceptionally weak, and the decision has had damaging consequences."

"It is time to heed the Constitution and return the issue of abortion to the people's elected representatives," it says.

Pelosi immediately released a statement condemning the court's apparent intention to overturn Roe — and suggesting that aborting a child is part of "the fundamental human right to reproductive care."

"Democrats believe that every woman everywhere has the fundamental human right to reproductive care, one that is not limited by background, income or zip code," said Pelosi. "Her health decisions, including whether or not to terminate a pregnancy, belong to her."

Overturning past decisions that declared the killing of unborn babies a right, Pelosi argued, would "erode the legitimacy" of the court.

"In brazenly ignoring 50 years of its own precedent, the United States Constitution and the will of the American people, this draft ruling would seriously erode the legitimacy of the Supreme Court in the eyes of the American people," she said. "Upholding the rule of law and maintaining the faith of the people require that the Court allow Roe to remain the law of the land."

Who is correct about abortion? The Catholic Church, which calls it murder? Or Nancy Pelosi, who calls it a right?

The church is right. Pelosi is wrong.