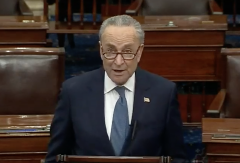 The U.S. Senate on Tuesday passed a $483-billion spending bill to further aid Americans during the COVID-19 pandemic---with only six members of the 100-member Senate participating.

The bill was approved by the “unanimous consent” of senators—most of whom were not there when that approval was given.

There were likely more people in your local grocery store spending a few dollars on supplies for their families at that moment than were in the Senate chamber—where they were dispensing almost half a trillion dollars.

Senate Minority Leader Chuck Schumer (D.-N.Y.) was one of the six members who did participate. He expressed his gratitude to his colleagues—present or not--for their unanimous approval of the bill.

“Now there are plenty of disagreements between our parties these days, but once again we are coming together to pass this legislation by unanimous consent—not a single senator objecting,” said Schumer

As reflected in the Congressional Record and in C-SPAN’s video of the proceedings, only five other members spoke or appeared on the floor during the brief discussion of the $483-billion bill.

Sen. Lee gave a floor speech reprimanding the Senate for not showing up to do its job.

“We've seen health care providers working 24 hours a day, 7 days a week,” said Lee.  “We've seen the president and his staff at the White House working 24 hours a day and 7 days a week. We've seen the Centers for Disease Control and members of the public health community who have continued to work tirelessly. Farmers and truck drivers and grocery store employees and pharmacists working to make sure that we continue to have access to the things we need in order to live.”

“And yet, Congress is in recess,” he said.

The Congressional Budget Office estimated that this bill will cost $483 billion. That includes $321 billion for the Paycheck Protection Program, $75 billion “to reimburse health care providers for expenses or lost revenues that are attributable to the novel coronavirus;” $25 billion “to develop, purchase, administer, process, and analyze tests for COVID-19;” and $62 billion “for salaries and expenses for loan programs of the Small Business Administration.”

None of the six senators who appeared on the floor wore face masks. On March 22, Sen. Paul announced that he had tested positive for COVID-19.