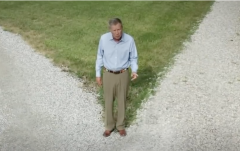 John Kasich wants people to believe he is supporting Joe Biden for president because his "conscience" compels it.

Assuming Kasich is being honest about this, a rational observer can draw only one conclusion: He is a moral idiot.

On Monday, the Columbus Dispatch ran a story with this headline: "Kasich Says Conscience Led Him to Biden."

In an interview with that paper, this former Republican governor of Ohio presented himself as a moral hero for backing the former vice president.

"Leadership means you can walk a lonely road," he told the paper.

"My decision is the right one and a good one," he said.

On Aug. 10, Kasich had appeared on CNN, where he is a "senior political commentator." Host Erin Burnett wanted to know why he was going to speak at the Democratic National Convention and endorse Biden.

"I would encourage other Republicans to know that it is OK to ... take off your partisan hat and vote on the basis of what your conscience tells you about the future of our country not just for yourself but for your kids as well," Kasich said.

"I am a conservative," Kasich told CNN.

"I'm going to disagree with Joe on things," he said.

"A lot of people scratch their heads about why some of these very conservative evangelicals support Trump," Kasich said. "It seems not to be consistent with the things that they believe in, as promoted in the Old and New Testament."

Really? So, Kasich is standing with the Bible when he supports his "man of faith," Joe Biden, but Christians are breaking with it when they support President Donald Trump?

The Book of Genesis says of human beings, "Male and female He created them." Where does Biden stand on that?

Biden has published an online document he calls "The Biden Plan to Advance LGBTQ+ Equality in America and Around the World."

In it, the former vice president promises: "On his first day in office, Biden will reinstate the Obama-Biden guidance revoked by the Trump-Pence Administration, which will restore transgender students' access to sports, bathrooms, and locker rooms in accordance with their gender identity. He will direct his Department of Education to vigorously enforce and investigate violations of transgender students' civil rights."

Under Biden's rule, a human being who God and nature made male will be allowed to play girls sports and use the female bathrooms and locker rooms.

But Kasich's "conscience" is driving him to support this candidate.

The Ten Commandments say: "Thou shall not kill."

In the Democratic primary debate on July 31, 2019, Biden made clear he believes abortion — the killing of an unborn child — is a "right."

"I support a woman's right to choose. I support it's a constitutional right," he said. "I've supported it and I will continue to support it, and I will, in fact, move as president to see, too, that the Congress legislates that that is the law as well."

In that same debate, he also made clear that he supports federal funding of abortion.

Thus, Biden not only favors the legalized killing of unborn babies but also wants to force taxpayers to pay for it.

And Biden goes beyond that to attack the very thing Kasich claims is driving him to support Biden: the conscience.

As this column has noted before, Biden has declared he will seek to restore the Obama administration regulation that was originally curtailed by the Supreme Court's Hobby Lobby decision. That decision said the federal government could not force business owners to pay for abortion-inducing drugs and devices through their health insurance plans if they had a religious objection to doing so.

That would force Americans to act against their consciences in the deliberate destruction of human lives.

But Kasich's "conscience" has driven him to support a candidate who promises to perpetrate that tyrannical act.

In his speech at the Democratic National Convention, Kasich did not mention a single public policy issue. But he did present the election as a moral choice.

"The stakes in this election are greater than any in modern times," said Kasich.

"Many of us have been deeply concerned about the current path we've been following for the past four years," he said. "It's a path that led to division, dysfunction, irresponsibility and growing vitriol between our citizens.

"Continuing to follow that path will have consequences for America's soul," he said.

Kasich — a self-professed "conservative" with a "conscience" — has apparently determined that putting America on a path to restore its soul requires putting a man in the White House who will demand that boys be allowed in girls' locker rooms, that killing unborn children is a "right" and that forcing others to pay for those killings is a legitimate exercise of federal power.