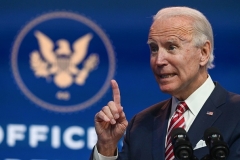 President-elect Joe Biden answers polite questions from his allies in the media on November 16, 2020. (Photo by ROBERTO SCHMIDT/AFP via Getty Images)

In which America would you prefer to live?

In one America, a family that works hard and saves money can afford to buy a detached home on a nice piece of land — with a two-car garage.

In their home, they have a refrigerator, a freezer, a stove, two ovens, a dishwasher, a washing machine and a dryer.

They purchased all of these appliances in an open market after doing careful research to make sure they got good machines that did the jobs they were supposed to do and were worth the money they cost.

They also have three toilets — that actually flush.

And two showers — that routinely run with hot water.

In the other America, the same family is regulated into an apartment or townhouse that is squeezed between two neighbors. They have no yard and no garage. They have a small refrigerator, a stove and one oven — none of which works very well. They do not have a dishwasher, but they do have a washing machine — if not a dryer.

All along the route, they see windmills and solar panels — blocking the once-splendid view of a nearby mountain range.

But they live in an "energy-efficient" America.

And they pay more in taxes than their predecessors did in the former America that the country's leadership has determined was overcrowded with energy-consuming appliances.

As you struggle to figure out which place you would rather live, consider, too, this follow-up question: Which one is closer to Joe Biden's "vision" for America?

Biden, you see, says he wants a "revolution."

On his campaign website, Biden published a plan for how he is going to achieve it. It is entitled "The Biden Plan for a Clean Energy Revolution and Environmental Justice."

America, Biden claims, faces an "existential threat" — and he is going to save us from it.

"From coastal towns to rural farms to urban centers, climate change poses an existential threat — not just to our environment, but to our health, our communities, our national security, and our economic well-being," says his plan for this "revolution."

Among the enemies posing this "existential threat" (as Biden sees it) are American homes, vehicles and appliances — as well as the spacious suburban neighborhoods where too many Americans complacently live in energy-consuming comfort.

Biden, says his plan, will "put in place a national program to target a package of affordable energy efficiency retrofits in American homes."

"He will direct the U.S. Department of Energy to redouble efforts to accelerate new efficiency standards for household appliances and equipment," it says.

"In addition," it says, "Biden will restore the full electric vehicle tax credit to incentivize the purchase of these vehicles."

"And," it says, "he will work to develop a new fuel economy standard that goes beyond what the Obama-Biden Administration put in place."

As Biden campaigned for president from his basement, he was apparently inspired by the idea that more Americans should take mass transit — or ride a bike — to work.

"Communities across the country are experiencing a growing need for alternative and cleaner transportation options, including transit, dedicated bicycle and pedestrian thoroughfares, and first- and last-mile connections," says his plan.

He intends to "fund local transportation" in a way that creates a "safer, cleaner, and more accessible transportation ecosystem."

Biden wants Americans to get closer to each other — not only in their housing but on their way to work.

"Altering local regulations to eliminate sprawl and allow for denser, more affordable housing near public transit would cut commute times for many of the country's workers while decreasing their carbon footprint," says his plan.

"Together," says Biden's related "Plan to Build a Modern, Sustainable Infrastructure and an Equitable Clean Energy Future," "these steps will unleash a clean energy revolution in America, create good paying union jobs that cannot be outsourced, and spur the installation of millions of solar panels — including utility-scale, rooftop, and community solar systems — and tens of thousands of wind turbines — including thousands of turbines off our coasts — in Biden's first term."

Imagine how beautifully Biden's plan will transform the American landscape and seascape. They will become environmental masterpieces.

And Biden says he will do this with "a federal investment of $1.7 trillion" and at least $3.3 trillion in what he calls "private sector and state and local investments."

When the government takes your money and spends it, Biden — who has spent 44 years in federal office — calls it an "investment" in his revolution.