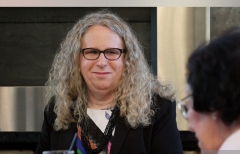 President-elect Joe Biden had a little bit of a problem dealing with the English language when he announced his White House science team on Saturday.

He used the verb "will" when he meant to say "is."

"I've always said that the Biden-Harris administration will also going to lead, and we're going to lead with science and truth," Biden said, according to the video on CSPAN.

"We believe in both," said Biden.

As he said this, Biden turned to look at Vice President-elect Kamala Harris, who was standing behind him. He laughed. She returned the laugh and said: "That's right."

This week Biden nominated Dr. Rachel Levine — the former Dr. Richard Levine — as an assistant secretary of the Department of Health and Human Services.

"She is a historic and deeply qualified choice to help lead our administration's health efforts," Biden said in a statement.

Why is this doctor "historic"?

"She is poised to become the first openly transgender federal official to be confirmed by the U.S. Senate," Biden's statement explained.

"She has been a leading voice in efforts to treat teens with medical and psychological problems," the paper quoted the governor as saying.

She went to Harvard as an undergraduate and then to medical school at Tulane, and eventually worked at the Penn State Hershey Medical Center and Health System.

"Along the way, she was married and fathered two children," said the Inquirer.

That's right: The Inquirer reported that "she ... fathered two children."

Someone else, apparently, mothered them.

"Now divorced," the paper explained, "Levine said she began the transition to becoming a woman about 10 years ago."

The internet played an important role in this "transition."

"Over the internet," she told the Inquirer, "there are so many more opportunities for the transgendered to find other people who relate the way they do."

But does the science say that a male can become a female when he changes his name and his manner of presenting himself?

What does science declare to be the truth?

The National Human Genome Research Institute, a division of the National Institutes of Health, has a page on its website that explains what it calls the "sex chromosome."

Thus, science says that whether a human being is male or female is determined by their chromosomes "when fertilization occurs."

They cannot change their sex when they are in their teens or in middle age. That is the scientific truth.

"Biden," says his campaign website, "believes every transgender or non-binary person should have the option of changing their gender marker to 'M,' 'F,' or 'X' on government identifications, passports, and other documentation. He will support state and federal efforts to allow for this accurate representation."

That is government advancing a falsehood. A chromosomal male who claims he is a female on his driver's license or passport is still a male.

Yet Biden also denies a more fundamental scientific truth about the moment of fertilization: It is when a human life begins.

As this column has noted before, Biden argued in a 2012 vice presidential debate with then-Rep. Paul Ryan that whether life begins at conception is a matter of religious doctrine.

"I accept my church's position on abortion as what we call a de fide doctrine. Life begins at conception. That's the church's judgment," Biden said. "I accept it in my personal life."

Biden then argued that he would not impose on other people his religious belief that life begins at conception by legally preventing them from killing unborn human beings through abortion.

"I just refuse to impose that on others," he said.

The scientific truth is: Every abortion kills a little boy or a little girl.

Biden refuses to protect these little boys and girls, just as he refuses to recognize men are men and women are women. He effectively rejects the first two facts of life.

Why? Because in his political party, you could not advance to the presidency if you publicly recognized and acted on these fundamental truths.

Now — with the help of the liberal media — they will seek to impose this same denial of science and truth on all Americans.