How DC Can Vote in Federal Elections 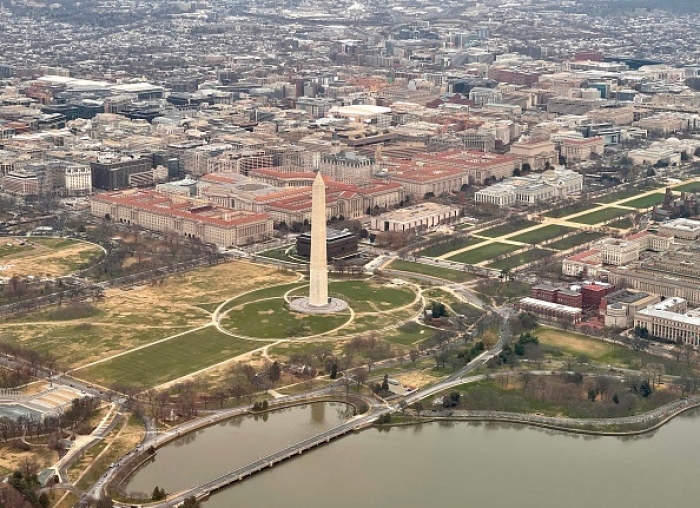 Aerial view of the The Washington Monument in Washington DC on December 18, 2020. (Photo by DANIEL SLIM/AFP via Getty Images)

When the Massachusetts Ratification Convention was debating whether to approve the U.S. Constitution in January 1788, Dr. John Taylor, a delegate from Worcester County, asked a pointed question about the language in the draft that called for creating a new and independent city to house the federal government.

"Dr. Taylor asked, why it need be ten miles square, and whether one mile square would not be sufficient," said the records of the convention.

Caleb Strong, who had been a delegate at the Constitutional Convention (and would later serve as a U.S. senator from Massachusetts), provided Taylor with an answer.

As reported in the records of the Massachusetts Ratification Convention: "Hon. Mr. Strong said, Congress was not to exercise jurisdiction over a district of ten miles, but one not exceeding ten miles square."

Specifically, Article I, Section 8, Clause 17 of the Constitution said that Congress shall have power to "exercise exclusive Legislation in all Cases whatsoever, over such District (not exceeding ten Miles square) as may, by Cession of Particular States, and the Acceptance of Congress, become the Seat of Government of the United States."

"Be it enacted by the Senate and House of Representatives of the United States of America in Congress assembled," said the journal of that first Congress, "That a district of territory, not exceeding ten miles square, to be located as hereafter directed on the river Potomac, at some place between the mouths of the Eastern Branch and Connogochegue, be, and the same is hereby accepted for the permanent seat of the government of the United States."

The states of Virginia and Maryland ceded to the federal government the 100 square miles of territory that originally constituted this federal district.

In his 1833 Commentaries on the Constitution, Joseph Story described the creation of this Capitol city and celebrated George Washington's role in it.

"The seat of government has now, for more than thirty years, been permanently fixed on the river Potomac, on a tract of ten miles square, ceded by the states of Virginia and Maryland," Story wrote.

"It was selected by that great man, the boast of all America, the first in war, the first in peace, and the first in the hearts of his countrymen," he said. "It bears his name; it is the monument of his fame and wisdom. May it be for ever consecrated to its present noble purpose, capitoli immobile saxum!" (A capitol of immovable rock.)

In 1846, however, Congress enacted legislation giving Virginia back its portion of the District of Columbia, cutting the Capitol to just the 68 square miles ceded by Maryland.

Democrats now want to make most of those 68 square miles (that used to be a small part of Maryland) into a new state — which like Florida or Texas would be entitled to elect two members to the U.S. Senate.

On April 21, 2021, the then-Democrat-controlled House of Representatives voted on party lines to pass the Washington, D.C. Admission Act.

"This bill," says its official summary, "provides for admission into the United States of the state of Washington, Douglass Commonwealth, composed of most of the territory of the District of Columbia."

"The commonwealth," says the summary, "(1) shall consist of all District territory, with specified exclusions for federal buildings and monuments, including the principle federal monuments, the White House, the Capitol Building, the U.S. Supreme Court Building, and the federal executive, legislative, and judicial office buildings located adjacent to the Mall and the Capitol Building."

This week, Democratic Sen. Tom Carper of Delaware introduced this bill in the Senate.

His primary argument for doing so was to give D.C. residents the power to vote in federal elections.

"Every day, we work in the shadow of our Capitol, a beacon for democracy around the world, and yet an historic injustice still prevails," said Carper. "There are nearly 700,000 Americans who call the District of Columbia home and they do not have a voting representative in either chamber of the Congress."

There is a better way to fix this than to remake our Capitol city — which was designed to be independent of any state — into a state of its own.

Call it the Taylor solution. Just as Congress in 1846 gave back to the state of Virginia the territory it ceded to create the District of Columbia, Congress can now give back to Maryland most of the land it ceded to create the Capitol. The territory in the District of Columbia that the Democrat-controlled House envisioned making into a new state can instead become a congressional district in Maryland.

Republican Rep. Dusty Johnson of South Dakota introduced legislation in the last Congress — the District of Columbia-Maryland Reunion Act — that would essentially do just that. He was joined by 25 co-sponsors.

A smaller District of Columbia — including all of the federal buildings and monuments that the Democratic House intended to leave it with in their statehood bill — would continue to be our Capitol city.

Terence P. Jeffrey is the editor-in-chief of CNSNews.com.