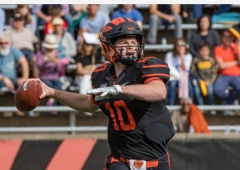 When a generation of young men at Princeton, Harvard and Yale invented American football in the decades after the Civil War, they must have envisioned that someday there would be a game like the one Princeton played Saturday against Harvard. This was football as it was meant to be.

It was not the crystal blue October sky that made this game so nearly perfect, or the red leaves falling from the maples, or the yellow leaves clinging to the elms. Nor was it the gothic towers rising through the autumn colors beyond the stadium wall.

It was what happened on the field that made this a day for the ages. Both Harvard and Princeton entered the game unbeaten in the Ivy League. But not long after the opening kickoff, evidence mounted that this may not be a contest of equals. Harvard dominated — on offense, defense and special teams.

By early in the fourth, Chapple had thrown five touchdown passes, including three to Juszczyk. He was on his way to passing for 448 yards, a Harvard single-game record.

Some of the only 10,832 who attended this game did not wait to see if Chapple would throw for a sixth TD. With 13:00 minutes left — the score 34-10 — they ambled back toward the maples and elms to resume their suspended tailgate parties.

They made the wrong call.

Harvard, looking to its 16-point lead rather than it unstoppable quarterback, committed a strategic error: It embraced conservatism in one of the few places it may not work — on the football field. Dre Nelson soon blocked Harvard's punt, and Princeton took over at Harvard's 48. There was 8:38 left to play.

Harvard, however, dropped its conservative strategy and marched almost the length of the field — twice picking up more then 20 yards on first-down passing plays. With first and goal to go they could have put the game away. But Princeton stopped them on third down and blocked an easy field goal on fourth.

Lineman Greg Sotereanos — who blocked the field goal — is a junior from Elizabeth Forward High in Elizabeth, Pa.

There was now 4:45 left to play. Tailback Will Powers, a sophomore from Jupiter Christian School in Jupiter, Fla., who plans to major in molecular biology, opened Princeton's drive with a 10-yard run. Several plays later, Michelsen tossed another touchdown, this one to sophomore Seth DeValve, a prospective mechanical and aerospace engineering major from Manchester High in Manchester, Conn.

Princeton needed a two-point conversion to tie. Michelsen rolled right and threw to Wilkinson, who was wide open at the back of the end zone. A Harvard linebacker leapt and knocked the pass down.

After the kickoff, Harvard took possession at the 40 with 2:27 left. Three running plays later, they faced a fourth and 1 on the 49. Chapple took his place behind center and called some sharp signals. No one moved. Harvard's punter took the field.

Princeton took over with no time outs, 1:57 on the clock and 90 yards to go. Six plays and 27 yards later, Harvard sacked QB Michelsen and knocked him out of the game. But the referees flagged Harvard for unsportsmanlike conduct and gave Princeton a first down on their own 45.

Quinn Epperly, a left-handed sophomore, replaced Michelsen at quarterback. Epperly graduated from Christian Academy in Knoxville, Tenn., and is thinking of majoring in economics.

Five plays later, with the ball on Harvard's 36 and the clock running at 20 seconds, he rolled left and lofted a high pass. Receiver Roman Wilson — a prospective sociology or economics major from Lincoln Christian in Broken Arrow, Okla. — leapt over a defender and fell with the ball in his arms 5 yards deep in the end zone.

Many problems in America today stem from underestimating the potential of young people. The student-athletes on this year's Princeton and Harvard football teams come from every region of our country and all types of secondary schools. And they made one thing very clear on Saturday: They have learned not to underestimate their own potential.