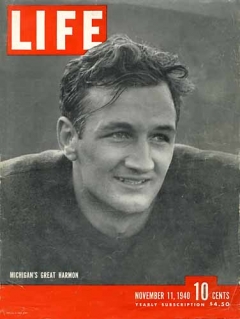 As a halfback at Michigan, he ran for 33 touchdowns, threw for 16 more, won the Heisman Trophy and was the first player picked in the NFL draft.

But the hardest hits Tom Harmon ever took were not on a football field. They were in the Army Air Corps during World War II.

Harmon came out of a big Catholic family in a small Midwestern town — and was proud of both.

"Lou and Rose Harmon were good Catholics, and they were raising their family to have faith in the 'Big Boss' upstairs," he wrote about his parents in his 1944 memoir "Pilots Also Pray."

He had five siblings, who were close — and candid — with each other.

"The Harmon children felt it was their right to say anything they pleased about each other, but let an outsider make a smarty remark about one of them and the battle royal was on," he said. "They just stuck naturally together."

Having won fame as a college star, Harmon made some remarkable decisions about his early post-college career. 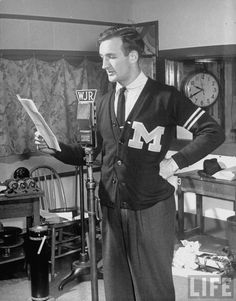 He first decided to pursue a full-time job in radio instead of professional football. "I knew that it would be an opportunity to make a great deal of money in a short period of time," he wrote of the pro game, "but all the same I knew I would be better off if I started my career right away instead of waiting two or three years."

He got his dream job at WJR in Detroit, broadcasting the Michigan football games in the fall of 1941. Yet before the season ended, he knew he had to leave that job and answer the call of duty.

Harmon became the pilot of a B-25 bomber, leading a crew of five other men. When they were flying to their first combat deployment in North Africa, on a route that took them over South America, they ran into a horrendous storm.

One wing of the bomber started to break lose. As the plane began an uncontrollable descent, Harmon ordered the crew to bail out. His co-pilot did through the bottom escape hatch.

"We were now at 4,000 feet and going down like a piece of lead," he wrote. "I looked behind me and could see no evidence of anyone in that ship. I ripped open the top escape hatch and the ship snapped into a dizzy spin to the left."

He got out and succeeded in deploying his parachute, which dropped him into the branches of a tree near the burning wreckage of his plane.

When he climbed down, he made a gruesome discovery. "There was somebody still in there. He was dead," Harmon wrote. "I could make out that it was Sergeant Gunnells. The shock hit me right in the pit of the stomach.

"Then I managed to go on checking all around the ship," he said. "I didn't find anything else there. But a short distance away I saw an arm that had been torn off at the shoulder. There was a propeller tattooed on it, so I knew it was Sergeant Goodwin's left arm."

Not finding the rest of his crew, Harmon headed due east through jungle and swamps, hoping to reach the coastline of French Guiana. On the second day, he adopted a unique tactic. "From this time on I started saying Hail Marys as loud as I could," wrote Harmon. "Saying them gave me the comfort of prayer and it might also notify anybody who heard my loud beller that a stranger was wandering in the vicinity."

On the fifth day, he came across a family in a thatched hut, who led him to a village, whose people led him to the sea. He survived.

But Tom Harmon did not give up flying. He transferred to a P-38 fighter.

He was deployed to China, where American pilots were fighting Japanese occupiers. This time, he was shot down by a Japanese Zero. He once again survived — but it took him 32 days to get back to his base.

One of Tom Harmon's sisters, his parents Lou and Rose Harmon, and Michigan football coach Fritz Crisler looking at the official notice that said Harmon had survived after his plane had been shotdown in China in 1943. (Bentley Historical Library, University of Michigan)

"Father Cosgrove said a thanksgiving mass in honor of my return," he wrote. "I think that I am a pretty hard guy, but I felt like bawling like a baby. When I looked around at the men crowded into that recreation room, Catholic and non-Catholic alike, taking part in this mass of thanksgiving, I could just have thrown in the towel," Harmon wrote in his 1944 memoir. "Nothing, absolutely nothing in my life, has ever equaled that moment."

As a football player, Tom Harmon had been inspired by Michigan's legendary coach Fritz Crisler. Later, Crisler was inspired by him.

"Like other boys in countless alien fields, he flew over tangled jungles, the hot sands of Africa and the rice paddies of China, ready to pay that last full measure of devotion to a nation that taught us to cherish man's birthright of decency and dignity enough to die for them," wrote Crisler of his former halfback. "His every achievement humbly beseeches parents, sons and all of us to have faith and fidelity in the dark hours of adversity."