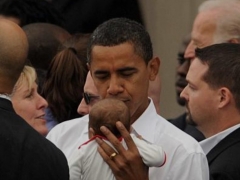 The most telling debate Barack Obama ever had was not with John McCain but Patrick O'Malley, who served with Obama in the Illinois Senate and engaged Obama in a colloquy every American should read.

The Obama-O'Malley debate was a defining moment for Obama because it dealt with such a fundamental issue: The state's duty to protect the civil rights of the young and disabled.

Some background: Eight years ago, nurse Jill Stanek went public about the "induced-labor abortions" performed at the Illinois hospital where she worked. Often done on Down syndrome babies, the procedure involved medicating the mother to cause premature labor.

Babies who survived this, Stanek testified in the U.S. Congress, were brought to a soiled linen room and left alone to die without care or comforting.

Then-Illinois state Sen. Patrick O'Malley, whom I interviewed this week, contacted the state attorney general's office to see whether existing laws protected a newborn abortion-survivor's rights as a U.S. citizen. He was told they did not.

So, O'Malley — a lawyer, veteran lawmaker and colleague of Obama on the Illinois Senate Judiciary Committee — drafted legislation.

In 2001, he introduced three bills. SB1093 said if a doctor performing an abortion believed there was a likelihood the baby would survive, another physician must be present "to assess the child's viability and provide medical care." SB1094 gave the parents, or a state-appointed guardian, the right to sue to protect the child's rights. SB1095 simply said a baby alive after "complete expulsion or extraction from its mother" would be considered a "'person, 'human being,' 'child' and 'individual.'"

The bills dealt exclusively with born children. "This legislation was about preventing conduct that allowed infanticide to take place in the state of Illinois," O'Malley told me.

The Judiciary Committee approved the bills with Obama in opposition. On March 31, 2001, they came up on the Illinois senate floor. Only one member spoke against them: Obama.

"Nobody else said anything," O'Malley recalls. The official transcript validates this.

"Sen. O'Malley," Obama said near the beginning of the discussion, "the testimony during the committee indicated that one of the key concerns was — is that there was a method of abortion, an induced abortion, where the — the fetus or child, as — as some might describe it, is still temporarily alive outside the womb."

Obama made three crucial concessions here: the legislation was about 1) a human being, who was 2) "alive" and 3) "outside the womb."

He also used an odd redundancy: "temporarily alive." Is there another type of human?

"And one of the concerns that came out in the testimony was the fact that they were not being properly cared for during that brief period of time that they were still living," Obama continued.

Here he made another crucial concession: The intention of the legislation was to make sure that 1) a human being, 2) alive and 3) outside the womb was 4) "properly cared for."

"Is that correct?" Obama asked O'Malley.

To explain his position, Obama came up with yet another term to describe the human being who would be protected by O'Malley's bills. The abortion survivor became a "pre-viable fetus."

By definition, however, a born baby cannot be a "fetus." Merriam-Webster Online defines "fetus" as an "unborn or unhatched vertebrate" or "a developing human from usually two months after conception to birth." Obama had already conceded these human beings were "alive outside the womb."

"No. 1," said Obama, "whenever we define a pre-viable fetus as a person that is protected by the equal protection clause or other elements of the Constitution, what we're really saying is, in fact, that they are persons that are entitled to the kinds of protections that would be provided to a — a child, a nine-month-old — child that was delivered to term."

Obama, however, saw a problem with calling abortion survivors "persons." "I mean, it — it would essentially bar abortions," said Obama, "because the equal protection clause does not allow somebody to kill a child, and if this is a child, then this would be an antiabortion statute."

For Obama, whether or not a temporarily-alive-outside-the-womb little girl is a "person" entitled to constitutional rights is not determined by her humanity, her age or even her place in space relative to her mother's uterus. It is determined by a whether a doctor has been trying to kill her.