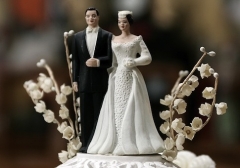 Fifty years ago today, in his State of the Union Address, President Lyndon Johnson declared an "unconditional war on poverty in America."

Over the next two years, he massively expanded the federal government, creating Medicaid, Medicare and the food stamp program, and increasing federal involvement in public education.

What impact did this have on poverty?

Yet, since Johnson declared his war on poverty in 1964, the poverty rate has never dropped below 11.1 percent (the level it hit in 1973) and there has been only one three-year period when it persisted above 15 percent.

But what causes some people to be relatively poorer than others in the United States?

What about children? Could they make a difference?

In addition to getting married and having children are there any other secrets to financial success? Yes.

It also helps to get a job and keep it. American families in which the householder worked at a full-time job at least 50 weeks during the year had a median income of $83,468.

Married couples in which both the husband and wife worked in 2012 had a median income of $91,779 and a mean income of $112, 217. No doubt many of these husbands and wives both held jobs because they wanted to earn the money to raise and educate their own children.

But what has happened to family life and the work ethic since LBJ and his liberal allies declared their "war on poverty"?

Last week, the federal Centers for Disease Control published its report on births in the United States in 2012. It pointed to two telling trends: Unwed motherhood remained near an historic high while the overall fertility rate hit an historic low. Americans are having relatively fewer babies and more of them are illegitimate.

In the fourth quarter of 2011, according to the Census Bureau, 108,592,000 Americans — 35 percent of the population — received benefits from one or more mean-tested federal welfare program.

That number will surely rise if Americans continue having 40 percent of their babies out of wedlock.

And, in their "war on poverty," left-wing politicians will no doubt increasingly target for redistribution the wealth of married, two-parent, hard-working, diploma-earning families who cause this nation's income inequality by living exactly the sorts of lives we must live if we wish to remain free.