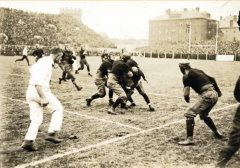 A massive crowd swarmed City Hall Park and the streets around it on the afternoon of Oct. 28, 1922.

The New York Police had been warned it was coming and diverted traffic as a safety measure.

Was the crowd there to protest? No. It was there to cheer on a college football game — one that was about to kick off hundreds of miles away in Chicago at a place called Stagg Field, which could seat only 32,000 fans. The undefeated University of Chicago Maroons (coached by the famous Amos Alonzo Stagg) were about to face off against the undefeated Princeton Tigers.

A bigger problem for both local and federal law enforcement — as evidenced by news reports that week — was making sure that the laws involving ticket scalping and theft were effectively enforced.

"Chicago is football crazy," said a report in the New York Herald. "It seems a shame that so few spectators can be seated at the Chicago field. It is no exaggeration to say that 200,000 persons might have witnessed this game if there had been room to pack them in."

"The police were also notified that 500 registered letters containing tickets for the Princeton-Chicago football game tomorrow had been stolen," the paper reported.

"Such tickets as fell into the hands of the speculators brought many times their face value," said the paper.

"One hundred dollars a ticket is the prevailing price today," it said.

"My idea of the Height of Affluence," a reader commented in the Chicago Tribune, "is possessing a ticket to the Chicago-Princeton football game."

The Herald noted a federal interest in the ticket scalping.

"With the last seat to the Chicago-Princeton game sold over a week ago and thousands of disappointed fans trying to find a way to gain admittance to the gridiron classic, government agents today renewed their drive against ticket scalpers," said this report.

"Twelve John Doe warrants were issued by United States Commissioner Mason in connection with the sale of unstamped tickets to the game by speculators," it said. "The laws require that excess prices for tickets be stamped on the back, the government collecting half the excess."

So why did a crowd gather outside New York's City Hall in 1922 to cheer on a football game being played in Chicago? The Brooklyn Standard Union and the New York Tribune published stories that explained it.

"The Chicago-Princeton football game, to be played in Chicago Saturday, Oct. 28, will be broadcasted from radio station WEAF in New York, by direct communication to a 900-mile telephone circuit running from Stagg Field to WEAF," said the Standard Union. "This is the first time in the history of radio that a long distance telephone circuit will be directly connected to a broadcast station."

The Tribune itself played a key role in what transpired.

"Thousands of football fans packed Park Row and City Hall Park yesterday afternoon to hear the play by play account of the game between Princeton and Chicago," reported the Tribune.

"In order to make possible this epochal event in the history of radio, half a transcontinental telephone system was connected up to WEAF by the engineers of the American Telephone and Telegraph Company, and more than a million persons throughout the East were able to listen to the progress of the intersectional battle," said the paper.

"At 1 o'clock yesterday afternoon the big white motor truck containing the mobile public address system developed by the engineers of the Western Electric Company was drawn up in front of the Tribune Building and connected by wires to the loud speakers erected on the third floor of the building."

"The volume of sound thus produced was sufficient to reach every one in the square, and even those standing on Broadway were able to hear each syllable clearly and distinctly," said the paper.

"The great crowd in Park Row contained many rooters for each team, who joined their cheers to those which were broadcast and who remained until well after dark to get the final result of the dramatic game," the Tribune reported.

And it was dramatic.

Going into the fourth quarter, Chicago led 18 to 7. But then Chicago running back John Thomas fumbled at Chicago's 35 and Princeton's Howdy Gray scooped up the ball and ran for a touchdown. Princeton successfully kicked the extra point (which Chicago had failed to do three times) and the score was 18 to 14. Princeton then forced Chicago to punt, drove for another touchdown — and, again, made the extra point.

A few minutes later, as reported by the South Bend News-Times, Chicago had first and goal-to-go at Princeton's six. They ran for two yards, then three, then one foot, then none.

Back at City Hall Park, the crowd listening to the radio broadcast had been riveted by these final moments.

"Toward the end of the game, with Princeton leading, 21 to 18, and the ball in Chicago's possession, inches from the Princeton goal line, the crowd could not have been more tense had they been at the actual game," said the Tribune.

When it was over, "Tiger supporters so far forgot themselves in their wild excitement that a number of them started a snake dance."

The first football games ever broadcast locally on radio were at the University of Minnesota. "In 1912, Professor F.W. Springer and a young instructor, H.M. Turner, began an experimental radio station with the call numbers 9X1-WLB," historian Ronald A. Smith wrote in his book "Play-by-Play: Radio, Television, and Big-Time College Sport."

"As part of their investigation," Smith wrote, "Springer and Turner broadcast accounts of Minnesota's home football games to a sparse audience."

"The 1922 Princeton-Chicago game was, though, a breakthrough for college broadcasting," Smith concluded.

"With the beginning of the 1922 Princeton-Chicago game," he wrote, "radio had made itself an integral part of the nationalization of football, by making interregional competition immediately available to masses through the airwaves."

Television, of course, would later join radio in broadcasting college football and in the 2019 regular season, according to the National Football Foundation, 392 games were televised. They "averaged 1,839,000 viewers per game ... while reaching more than 145 million unique fans."

When college football games are played on Jan. 1, 2022, America can celebrate 100 years of football broadcasts.

It is one of this nation's great traditions.